Halfway around the world in New Dehli, a conference will be held later this month between developing nations.  It’s hard to imagine anything further from the minds of most Americans, and it’s unlikely to make the news.  Yet what sources say will be announced could change our economy and standing in the world more than anything else that will happen this year, given enough time.  It could mark the moment that China takes its natural next step on the world’s stage.

Economic restructuring always occurs in a Depression as the system that crashed at the start emerges as a different arrangement that looks ahead to the future.  It’s a time of great opportunity, sometimes disguised as desperation.  That restructuring is taking place in the USofA slowly, but much more rapidly when the sun shines on the other side of the globe.  That’s why we should be careful what we wish for in the dead of the night. 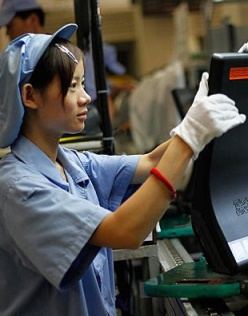 The conference in question is between the Central banks of the BRICS nations – Brazil, Russia, India, China, and South Africa.  They will agree to open up their banking to each other and use their own currencies in exchanges.  It’s the first step toward a convertible Renminbi (RMB), the term for the Chinese currency (technically the Yuan).  Once it is used as an international medium of exchange it will eventually start to float versus every other currency in the world.

These five nations together are about 20% of the world’s product, but more importantly they are the fastest growing economies.  Brazil, for example, just passed the UK to become the sixth largest economy in the world, growing at an annual rate of 2.7% compared to Britain’s paltry 0.8%.  Within 10 years these nations could be easily be a quarter of everything made and consumed on the earth.

This is extremely important for many reasons.  The first is that the USofA has long been concerned that China does not “play fair”, keeping its currency relatively low in value and its products cheaper than they otherwise would be.  It has been a campaign issue as we try to boost our own manufacturing.  The only long-term solution is to have their currency traded like anything else around the world, removing the artificial barrier that has been erected between the internal Chinese economy and the rest of the world.

China is not simply leaping onto the world’s stage to play a bit part in the big show, however.  By easing out slowly in the company of friends, the RMB will take up some of the trade that is currently priced in US Dollars.  Along with their BRICS partners they will shove aside the need for a large Dollar reserve, a system that has tied the USofA and China together in ways that neither is comfortable with.  This is the most serious challenge to date to the “Dollar Standard” that has ruled the global economy since the end of WWII.

There are many reasons why China is taking this step, and not all of them are sinister.  The best way for them to relieve the internal inflation they cannot control is to project their new wealth outward into the world.  Convertibility of RMB is inevitable for this reason – but wary China has found a way to do it on their own terms.

The end of the Dollar Standard forces a tremendous reckoning that we are not at all prepared for.  It will certainly reduce the global value of the US Dollar as demand for it declines in international trade, making our exports more competitive.  However, we have built an economy based largely on sending US Dollars overseas and getting goods in return that will soon pass into the night like some kind of strange dream if the BRICS nations get their way.  Things will necessarily change as our economic influence wanes.

But this is completely inevitable as global trade is expected to rebound from the Depression lows quicker than originally thought.  Big bets are being placed on more trade as the largest containerized cargo ships ever are being built and ports are expanding to meet the demand.  The US Dollar has always strengthened as trade grew in the past through the development of containerized cargo.  But when shipments are valued in other currencies we will be left on the sidelines, trading as nothing more than another nation with hungry mouths to feed.

It’s just another agreement to be signed between nations that most people rarely think of as economic powerhouses, if they think of them at all.  But it may be the most serious challenge yet to the US Dollar yet.  We may say that we want RMB to trade like any other currency, but we should be a lot more careful about what we wish for.