Between the political conventions, the people running for the second most powerful office in the land have to stand down for a moment and let the Big Guy speak.  That would be Ben Bernanke, who delivered his annual address at the Jackson Hole conference today.  You want real power?  If being able to print $1.6T ain’t it, I don’t know what is.

The speech was highly anticipated because in the past the occasion was used to announce rounds of Quantitative Easing.  There was hope there would be a third round of it, which is to say more greenbacks flowing out into the economy hot off the Fed presses.  It didn’t happen.  Bernanke spoke instead about what’s gone wrong and what they’ve done to try to get things to start back up. 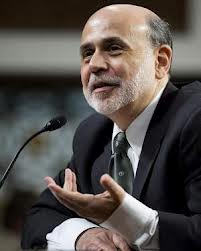 This was not what Wall Street wanted at all, but it was an interesting speech.  We know what the Fed is keeping an eye on and what they are worried about.  An awful lot was said about employment and real estate prices, the stuff that Alan Greenspan rarely talked about.  Very little was said about big financial markets.

Bernanke sounded more like he was the one running for re-election.  Dig this conclusion:

Monetary policy cannot achieve by itself what a broader and more balanced set of economic policies might achieve; in particular, it cannot neutralize the fiscal and financial risks that the country faces. It certainly cannot fine-tune economic outcomes.

Translation – I’m doing the best I can, but I can’t do the President’s and Congress’ jobs for them.

This summary highlights what Bernanke saw as the three “headwinds” that the economy still faces – low housing starts (and construction in general), a decline in overall government spending led by state and local government, and uncertainty about Europe.  Most of this is bread and butter stuff that the Fed can only influence on the edges, at best.

But will they have a QE3, a third round of more money?  We have this to chew on for a bit as the Fed considers quantitative easing and other “nontraditional policies”:

In other words, maybe.  Ben is a pretty good politician after all.

Bernanke was overall a bit defensive, explaining what the Fed has done and why rather than give a clear signal as to what will come next.  Despite the gentle language and careful delivery, the main message appears to be that he is sick of standing alone in the storm, the only one out there doing anything about it.  As much as the stock market traders were hanging on every word for instructions, the speech was not for them.  It seemed more like a broad policy speech for the electorate.

How important was Bernanke’s speech? In the end, we didn’t learn anything new about Fed policy or direction.  But we did learn that the lack of a genuine stimulus from government is weighing very heavily on their decisions at this point.

That’s hardly news, but it shows how the balance of power is shifting into the hands of an unelected body that has control over the printing presses which define the “Full faith and credit” behind our currency.  The only thing really disturbing about Bernanke’s speech was that it seemed like it would be so critical in the first place.

6 thoughts on “The Real Power”