It’s been a long time since I wrote about Europe.  How many ways can a humble blogger say, “Nothing has really changed”?  Nothing has.  Currency union has turned into a straightjacket of austerity and the European Union is plunging into a deep recession.  The only true news has been a day of protest across Europe, fueled in part by the now 25% unemployment rate in Spain and other nations.  It has become a full meltdown.

But so far, no banks have failed.  Isn’t that wonderful?

There are several potential problems for the US as this continues, but the most important is its effect on our trade.  Yet, for all the trouble in Europe, it may not affect us at all.  Can Europe burn while the US stands by?  The short answer is sure, why not.  Here’s why: 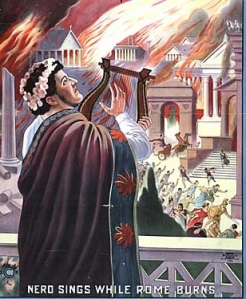 What Europe represents to us, economically, is a market.  About 1.6% of our GDP is sold to Europe and a bit more comes back.  We run a small trade deficit with Europe, overall, of just under $9B a month off of exports of around $21B per month.  If Europe absolutely collapsed we would definitely miss the production that they take up, but it would hardly kill us.

Then again, our exports to Mexico are rather similar, around $19B per month.  Any money we might spend propping up Europe might just as well be spent curbing violence and generally helping our neighbor to the south get themselves going more strongly.  It is simply a matter of perspective.

What ties us to Europe is far more than trade, of course.  Our banking systems are very closely linked, with many Credit Default Swaps issued in the US “insuring” European sovereign debt that everyone is trying to not have fail.  That’s what started the waves of austerity in the first place – more or less protecting the international banking system ahead of the people of Europe.

In other words, what’s been happening so far is clearly in our best interests.  Should we ignore it?

I think it is best for us to not ignore Europe, but to learn from it.  We are playing with a largely fictitious “Fiscal Cliff” at the end of this year – a series of nasty things that are about to happen if we do not balance the US budget.  The most likely result is a delay of some kind in the budget balancing process, ideally a search for a long-term solution using the Simpson-Bowles framework.  So far, the US has consistently chosen growth over austerity, spending rather freely with large budget deficits and rounds of “Quantitative Easing”.  It angers many conservatives, but our path is one of growth – and the economy is slowly rebounding.

What Europe represents to us, above all else, is an example of what not to do.  The deepening chaos caused by rigid austerity should make everyone pause.  It gives the news an incredible allegory to talk about, if only they can grab this story and run with it.

Of course, we can manage our spending much better and be much more efficient at economic transformation and real growth.  I’m all for that.  But austerity has been shown to be a terrible failure by any measure.

And if JP Morgan collapses in a wave of European default?  I won’t cry a single tear for them, and I don’t think their influence on the economy matters one bit anymore.  If we lose the exports to a Europe deep in a second wave of Depression?  Better to invest in Mexico – or Columbia, Brasil, and so on.

The great thing about the story out of Europe is that increasingly we have no reason to worry about it at all, except as an example of why pure austerity is exactly the wrong thing in a Depression / Kondratieff Winter.   The suffering is terrible and completely avoidable, yes, but there’s a good chance that their austerity is not going to last forever.  It’s clearly not working at all.

10 thoughts on “While Europe Burns”