The parties are over, and we got through the New Year and the Inaugural.  Everyone in Washington is back at work and ready to make great things happen.

It’s worth looking back if for no other reason than to make a few predictions – or at least know what to look for in 2013.  Let’s break it down.

The graph below has 3 different things on it from January 2009.  The blue line is the net change in consumer confidence, as measured by the University of Michigan Survey.  The red line shows  the net change in corporate profits, always a good measure of what we can expect on Walls Street.  And the green line, on the right scale, is the gain of jobs in thousands. 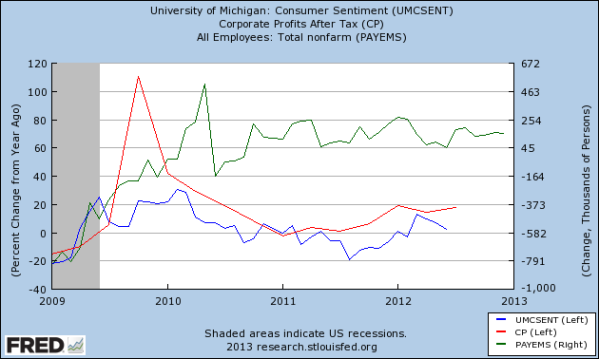 Outside of a few odd spikes, the lines are all very flat.  But there have been a few trends that we can see which are developing and we hope will continue to develop in 2009.  It’s probably easier to summarize the trends in chart form, year by year:

Let’s take each of these things to watch one category at a time.

Jobs:  We’re adding 1.7M jobs per year since the low in 2010.  It’s not bad, but it’s not great.  What we can expect in 2013, at least if the job growth is real, is a decline in youth unemployment along with the present trends continuing.  Hiring more youth would be a strong signal that the market for experienced workers has tapped out and we are finally making our way towards the kind of growth in jobs that will get us out of the Depression.

Consumer Confidence:  It’s been up in 2012 for the first time since the last official recession, the highest it’s been in 5 years.  It spiked as high as 80 (1966=100 by definition) and shows signs of general improvement. Those trends should continue through 2013, or at least not decline.  A number above 50 suggests growth, and we should stay above that through the year if we are going to see improvement generally continue.

Corporate Profits:  Some will tell you this is a bad thing, but corporate profits usually rise before employment at large companies.  They did rise in 2010, right before hiring started to pick up the next year.  They haven’t risen much since.  We won’t see a strong rise in employment until they do, like it or not.

Real Estate:  2012 was the year that the “housing bubble” was finally put behind us – at least according to some real estate watchers.  That has to continue through 2013 before we can call this the real end of the bubble, and they should.  This is something to watch for through the year.

So what should we expect in 2013?  The job growth should continue, but look more to a decline in youth unemployment before you believe it’s a strong turnaround.  Consumer confidence should stay around 80 through the year, and if anything should go up – but don’t expect a miracle.  Corporate profits will have to rise before Wall Street will get out of the secular Bear Market, and that should happen this year.  Lastly, real estate should continue solid gains.

Think of these less as predictions and more as the signs that we need to be sure that the recovery is real.  If one of the four doesn’t happen it will be a sign we’re still mostly treading water.  Two or more of them fail and we could enter another official recession.  That’s the call for 2013.

Anything else we should watch for?