The main challenge in this year’s FIRST Robotics Challenge is to scoop up a 2-foot yoga ball and shoot it into a goal 6 feet high. The machines that have to do this are designed and built by high school kids, including my son George. Many of them have never done anything like it before. It takes strategy, planning, and a lot of learning how to use power saws and drills. But the Great River School team 2491 No Mythic is hitting the challenge with great energy and determination. It’s also a lot of fun.

My role as a “mentor” is mainly to coach them along, but I also get my hands dirty. I also teach them really bad things like how to strip wires with their teeth. Through it all the robot is coming along. The pneumatic and electrical systems work well with the programming and no one has gotten hurt. It shows what kids can do when they simply get in and do it.

A study came out that says a little more about letting kids go off and do what might seem dangerous, even at an early age. It seems to fit with what I’ve seen at Robotics League.

Kids playing “Bullrush” in New Zealand. It’s like rugby without a ball.

A lot of people worry when kids are being kids. There is always the potential for serious injury when things get physical, as they often do. Perhaps it’s a rational fear of losing them or maybe it’s a symptom of a world that’s gotten horribly lawyered up, but most kids shuffle along through school under dark clouds of rules that limit what they can do. What they learn from the experience is that life is about rules, and those who can’t follow them for whatever reason are usually cast off as “trouble”.

But a school in New Zealand tried something different out on the playground with their little ones. Swanson Primary School, near Aucklland, took part in a study by Auckland Tech and Otago University where they got rid of the formal playground and all of the rules. Recess became their own time to structure and play as they saw fit. Some more violent games like “bullrush” (which we knew as British Bulldog) came back as well as playing with sticks and other implements of destruction.

The results were amazing. Disciplinary action declined substantially, and bullying incidents dropped to zero. Better yet, academic performance increased. The kids were happy and anything but sedentary sacks of cheeze-doodles. And no one was ever seriously hurt. 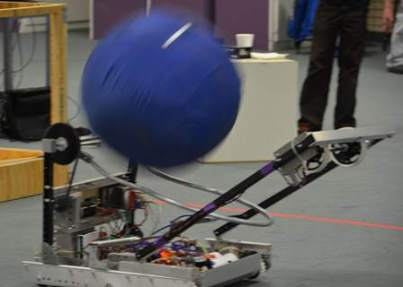 It shoots, it scores!

This may seem very different from our experience with high school kids at Robotics League, but the experiences overlap. Let kids go out and figure out what they can do and they wind up doing amazing things. When they are young and simply need to blow off steam it may look dangerous, but it’s better than trying to bottle up the energy with a lot of rules. When they are older, they have to be encouraged and trusted regardless of the perceived “danger”.

Some guidance is always good and strategy is a skill that has to be learned. But how else is the next generation going to learn how to do, how to lead, and how to make the world in their own image?

Every parent worries about their kids getting into trouble, and there is certainly enough around when they are looking for it. In a rule-bound world where the kids are kept under control, however, all of them wind up on the wrong side of authority at some point – or at least learn to be in fear of the rules. Trouble only comes naturally to anyone who is constantly on a tightrope fearing a wrong step.

Kids can do anything, if you let them. The only risk is how much you’re willing to be amazed.

When kids are set free they tend to take care of themselves far better than any big set of rules ever could. With a little bit of coaching and encouragement the confidence they learn can be channeled into something great, like a team that can build a robot with dozens of acts of leadership shaping, forming, and building.

It is the leadership that matters in the end. Ellen, the team captain, is a senior who has skills as an engineering manager that beat most of the bosses I’ve ever had. But leadership comes naturally from one task to the next as whoever has the skills to get it done steps up and takes their turn to make things happen. This team may be building a robot today, but tomorrow they’ll be doing even more amazing things.

What happens when you turn kids loose to do what they do best? Anything. A good coach helps, but they are the ones who can design, build, and pilot their own machine – as they will do for the whole world one day soon. The only real danger is not letting them learn their limits and abilities when the price of mistakes is just a few bruises.

12 thoughts on “Kids Being Kids – Amazing”