The Congressional Budget Office (CBO) has released their projections for the next 10 years and you can tell they were written by economists. There is plenty of good news and bad news in the report, and the details become very hard to read. Deficits will go down, and the economy will grow – but interest on the debt already incurred is going to turn into a very large and crippling bill.

To make these projections, they start with current policy and trends and simply extrapolate forward. None of it is written in stone, and some of it is clearly a warning to create new policies. Let’s run down what we have in front of us and what has to be done.

First of all, the projections are based on decent but hardly record breaking growth in the economy over the next 10 years. The CBO assumed a shade over 3% growth in GDP for the next two years and a shade under after that. After 2017 the unemployment rate (U3) is expected to be below 6%, which is what we’ve been assuming all along. The big hit to GDP that came in 2007-2009 should be erased.

The CBO says we’ll make up the losses in growth.

The good news is that the deficit has already fallen from 10% of GDP in 2009 to 3% today. That may sound like great news and time to relax about deficit reduction, but it isn’t. There are problems ahead, especially after 2007:

“… revenues are expected to grow at roughly the same pace as GDP whereas spending is expected to grow more rapidly than GDP. In CBO’s baseline, spending is boosted by the aging of the population, the expansion of federal subsidies for health insurance, rising health care costs per beneficiary, and mounting interest costs on federal debt.”

The last one is especially troubling, largely because there is nothing we can do about it. Interest costs are going to rise as interest rates rebound to normal levels after 2017. The rise from $233B today to $880B in 2024 is largely unavoidable unless there is even more deficit control. It has the potential to really bust the budget.

The other items that will increase spending by current policy are largely based on the cost of health care, realized either as the Affordable Care Act or Medicare. Both have big issues as the population ages and costs are expected to keep rising as a share of GDP: 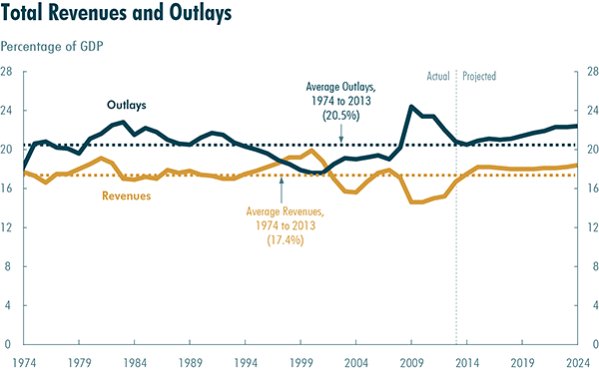 This all assumes current policy, of course, so any increased revenue found by, say, increasing corporate taxes should cover it. Or, if we go that way, fairly deep cuts in Medicare. There are big issues ahead no matter what.

That’s what this report is about, after all, and it does show very specific action that is necessary to keep the Federal government on track. While there was a lot of deficit reduction in 2013, perhaps more than a weak economy suggests is prudent, it came largely through sequestration and other unthinking cuts. That isn’t going to be possible for these future deficits. The government is going to have to figure out a way to work together to head off the problems in the future and, ideally, start to invest a bit more in the neglected infrastructure of the nation along the way.

While there is still a lot of promise for the economy in the next few years, the budget remains something of a train wreck waiting to happen. It could certainly be a lot worse, but given the fact that the problems require cooperation and intelligent thought we can’t expect too much.

Perhaps the biggest policy changes ahead will come from the electorate, in the form of a new Congress between 2014 and 2016. We’ll certainly have a new president on January 20th 2017, perhaps the childish games will come to an end then. They better because by this CBO report even that is a bit too late.

The CBO has a lot to tell us about the next 10 years if we don’t do anything at all. You can read it as a projection of good times or bad, depending on how you want to take it. The best read is as something like a warning. Things could be really good if only we do something intelligent for a change.