The stock market is surging on solid corporate profits. Jobs are being created, if a bit slowly. Should the Federal Reserve continue its policy of Quantitative Easing? The short answer is probably not. But the policy of buying $85B in mortgage backed securities is continuing, at least for the foreseeable future. And with Janet Yellen, the Fed Vice Chair, slated to replace Ben Bernanke in January we have every reason to believe that the policy will continue.

It’s time to examine how the Fed sets their benchmark interest rate, the Fed Funds Rate, and what we can reasonable expect them to do with it in the near future. It shows just how much the Fed is really in charge of the economy – absent a Federal Government that is doing what needs to be done.

Since January 2009 the Federal Reserve has pegged the Fed Funds rate at zero percent. That’s the rate at which member banks can borrow money from the Fed to loan out to businesses and consumers, and it’s the key interest rate benchmark.  Borrowers can expect to pay this rate plus a little more to the bank managing the risk (and making some profit!).  A lower rate means money is cheaper and more available, causing economic expansion – and eventually inflation. A high rate slows things down and tames inflation. The key is to keep everything in balance.

The exact way the Fed picks a rate is a mystery. In 1993 John B. Taylor, a Stanford Economist, proposed what is now known as the “Taylor Rule” that balances out the various forces in the economy and predicts an optimal Fed Funds Rate. His research showed that the Fed set their rates too low in the 1970s during the period of runaway inflation.

The problem with the Taylor Rule is that it is complex and contains a lot of math. In 2003, Harvard Economist Greg Mankiw proposed a simpler version that eliminated most of Taylor’s variables and produced a very simple formula:

“Core Inflation” is the rise in prices other than volatile food and gasoline, and Unemployment is the headline U3 rate.  It seems to hold pretty well, and it does predict about where the Fed sets the Fed Funds Rate. Graphing this from 2008 to today gives us this chart:

The Mankiw Rule since January 2008. It’s not an exact science by any measure, but it works.

Note that in January 2009 the calculated rate drops off suddenly below zero. You can’t have an interest rate below zero – that would be the same as paying people to borrow money from you, and the system is not set up to handle that! So once the Fed set their rate to zero they started “Quantitative Easing” (QE), or easing up the supply of money with a fixed quantity of money rather than by setting rates.

The first QE was a modest one, a $300B purchase of Treasury Bills (US Government Debt) in January 2009. But that came after an $800B stimulus in November 2008 that was used to shore up weak markets after the collapse of Lehman Brothers. That was QE1, for lack of a better name. This was followed by another $600B in November 2010 (QE2) and then in September 2012 the purchase of $85B per month in mortgage backed securities (QE3, now $1.1T and counting). Altogether, it’s $2.8T. 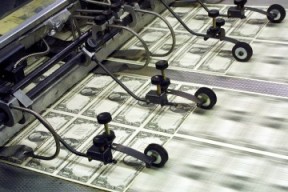 But something interesting happened in January 2012 as the economy started to rebound – the Mankiw Rule went positive! That suggests that the Fed Funds Rate should be a bit under 1% today with zero QE. Instead, we have rates stuck at zippola and a QE program that suggests an effective rate of around -2%. So what’s going on?

The short answer is that the ever-increasing margins demanded by business show how weak confidence is in the economy. Until there is a wave of hiring, the Fed has made it clear that they intend to keep the economy awash in cheap money.  Given the rapid decrease of the Federal Deficit it’s understandable.

What will it take to restore confidence to the point where the Fed feels it can again follow the rules and raise interest rates – or at least cut off the QE. Exactly what that means is still a mystery, but Bernanke has made it clear that without inflation on the horizon and a lack of jobs he’s all in favor of keeping the expansion we have going.

There’s every reason to believe that Yellen will continue this policy, too, although the transition to a new leader might be an excellent time to start the “taper” to zero QE that has long been anticipated. But the point is that by any reasonable measure the Fed is expansionist and doing all it can to support the economy through the end of this business cycle.