After the mechanized cruelty and destruction of World War II, two important works of literature tried to capture the feeling of despair.  Along with well known 1984(1948) by George Orwell, there is the lesser known Age of Anxiety (1947) by W H Auden.  Both of these cast a shadow we still live under, twisting our language to defy and define a mechanical world not entirely fit for humans.  Auden’s more romantic treatment is worth the read if for no reason other than its resonance today.

The Age of Anxiety was written as an epic poem, subtitled “A Baroque Eclogue”.  It is a kind of hero’s quest, but in this case the heroes are looking for little more than a good time that they never quite find in a dank bar filled with chatty strangers.  The characters are also horribly under-developed, probably deliberately, as they are melded into one purpose.  For the “Seven Stages” of life, likely a riff off of Nietzsche, the old drunk Quant describes a stolen moment of mis-spent youth this way:

Secret meetings at the slaughterhouse
With nickels and knives, initiations
Behind the billboards.  Then the hammperpond looked
So green and grim, yet graciously its dank
Water made us welcome – once in, we
Swam without swearing. The smelting mill
We broke into had a big chimney
And huge engines; holding our breath, we
Lighted matches and looked at the gears,
The cruel cogwheels, the crank’s absolute
Veto on pleasure.  In a vacant lot
We built a bonfire and burned alive
Some stolen tires.  How strong and good one
Felt at first, how fagged coming through
The urban evening.  Heavy like us
Sank the gas-tanks – it was supper time.
Telephones gabbled untidy cries,
And on embankments black with burnt grass
Shambling freight-trains were shunted away
Past crimson clouds.

The language is dense and jumbled by the energy of the moment and the exhilaration of a bunch of kids capturing their discovered lands.  It’s just a passing scene to Auden, a man who could romanticize nearly anything.  In the hands of Anthony Burgess and A Clockwork Orange (1962) the same theme resonated into a whole stolen day: 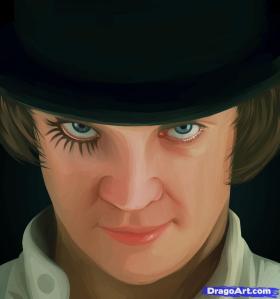 The next morning I woke up at oh eight oh oh hours, my brothers, andas I still felt shagged and fagged and fashed and bashed and my glazzies were stuck together real horrowshow with sleepglue, I thought I would not go to school.  I thought how I would have had a malenky bit longer in the bed, an hour or two say, and then get dressed nice and easy, perhaps having a splosh about in the bath, make toast for myself and slooshy on the radio or read the gazetta, and on my oddy knocky.  And then in the afternoon I might perhaps, if I still felt like it, itty off to the old stolliwoll and see what was vareeting in that great seat of gloopy useless learning.  O my brothers.  I heard my papapa grumbling and trampling and then ittying off to the dyeworks where he rabbited.

The language needed to describe these scenes is off and odd because the aimlessness requires it.  Neither one has the politics of Howl by Allen Ginsburg, (1956) but they share the twist of language. The stolen moments define the characters outside of the world they are rejecting, today’s Tom Sawyer.  Through A Clockwork Orange, the movie (1970), the images form the backbone of dystopian cinema that would become its own genre.  Blade Runner and Mad Max begat Terminator and eventually Fight Club or anything by Tarrantino as the same feeling preened its way to the Mall to scene and be seen.  Characters, to the extent they are defined at all, are molded by how they steal their own moments outside of their world.

What Auden was describing in the Age of Anxiety was a desperate need to find a human feeling, a moment of joy, among people that were pressed into something far beyond their own flesh and comprehension.  This view came to dominate literature in the late 20th Century even when the great luxury of ennui was the main emotion that bubbled up.  But anxiety, a flash of fear that often andrenalizes into anger, remains the force of our lives to this day.

It’s worth revisiting the roots of this theme in literature and movies for many reasons. The most compelling is to find the antidote for what Auden’s language dances around, the strong half-step apart and yet within the world.  It also gives real meaning and heft to Rap as well as Punk/Hardcore as legitimate children of an art, a heritage both deserve when they are done well.

If nothing else, the enduring elaboration of the Age of Anxiety continues.  As much as I enjoy Auden, it is a terrible shame that the hot blood that drives our supposed politics and ramblings on the web is made of a busted quest that we have been on for over 60 years.  Isn’t it time to either sit down and accept this or retrace our steps to find out where the quest went wrong?

3 thoughts on “Age of Anxiety”