The pictures and stories coming from Donetsk, Ukraine, are horrifying. Bodies flung from Malaysia Air flight 17 have been lying in the fields right where they fell from the sky, rotting in the summer sun for days. Wreckage is everywhere, some of it disturbed in what appears to be looting as much as recovery. How can this happen?

The short answer is that the area is not under the control of any organized or trained government, but held by a group of separatists with guns. Some have been described as “visibly intoxicated” as they fired into the air to shoo off international investigators. It seems ridiculous, but the families – indeed, the entire world – is being held hostage by a few wackos with guns.

That’s the state of the world right now as we all draw much closer. A little bit of chaos in one part of the planet affects everyone – even when the number of people involved is small.

When the 777 was shot down over Ukraine, may people didn’t want to believe the most likely scenario, namely that it was indeed shot down by a small number of separatists with advanced weapons. Many think that these sorts of things, the chaos that disrupts our world, has to come from careful planning in the distant halls of governments with the desire and the technology necessary to bend millions to their will. Conspiracy theories abounded as they always do. How could a small number of people kill so many on their own for reasons that appear random and capricious to the outside observer?

The short answer is that things like this happen constantly, and news cycles are generally filled up with the actions of a very small number of wackos with guns.

Consider the situation in Gaza, which has killed 600 Palestinians, 19 Israelis, and wounded thousands. The Izz ad-Din al-Qassam Brigades, or the military arm of Hamas, is estimated to be well under 1,000 men who are actively engaged and formally trained to be soldiers. The number of people who launched the rocket attacks on Jerusalem and started this carnage is smaller than the number of people in the live audience at a performance of “A Prairie Home Companion”. While they have a militia of loosely trained members numbering as much as 15,000 the people who engage Israel with the heavy weapons are very few in number.

The same is true of ISIS/ISIL, the group that has taken over half of both Syria and Iraq, chased a million Iraqis from their homes, and disrupted oil supplies – temporarily spiking the world price for oil up as much as 5%. They number no more than 2,000 strong, probably closer to 1,000 by most estimates.

Both of these groups appear larger because of the mayhem they can create, and that’s in large part due to the advanced weapons they have. But they are still very small in number as they command the world’s attention. 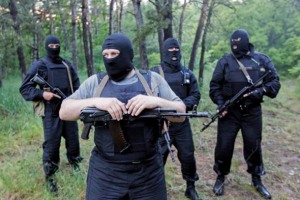 For their part, the Donbass People’s Militia, the Russian separatist group that now can shoot down planes, is quite strong at about 15,000 armed men. But they are untrained, undisciplined, and generally unorganized. They are little more than wackos with guns – in their case very big guns that can kill hundreds with one careless shot. In firefights with the Ukrainian regulars they have proven to be terribly ineffective, running away when cornered. But that did not stop them from disrupting the world’s aviation and creating a scene of genuine horror which has stopped the world.

The list goes on. Even more benign groups of wackos with guns can capture our attention. Open Carry Texas, which is guilty only of being very rude and threatening, appears to number less than two dozen people by the video they’ve shot. In a state of 26 million people, they are one in a million at best – and the ‘net has lit up with reports of their antics. They haven’t even fired a shot.

What does it take to horrify the world? Who can take this ever closer world and grind it to a halt as trade is disrupted and millions have to scramble to safety? Is there some grand conspiracy behind the chaos that unfolds nightly on the news?

All it takes are a few wackos with guns. And there are a lot of wackos with a lot of guns out there, creating a lot of mayhem. That is the close world we live in – one where even the big governments that may have big, evil plans are ultimately forced to ride out and respond to chaos every day.

11 thoughts on “Wackos with Guns”