As with every 9/11, the passage of this date brings an exhaustive recounting of long debunked conspiracy theories.  This piece from 2014, slightly updated,  discusses only one aspect of the ridiculousness of this spectacle.

The US commitment to being the policeman of the world. continues, bringing us into conflicts everywhere.  One of these is the still ongoing fight against Da’esh or ISIS, which has never been totally vanquished.  Why?

If you believe one conspiracy theory popular in the Middle East, it’s a creation of the US – for the purpose of doing just what we’re doing now, which is a justification for more interference.

While this comes from a region of many conspiracy theories, hatched by governments like Iran with strong propaganda needs, it’s actually a common type of conspiracy theory. It comes from looking at the result of a world event and then working backwards to determine that the outcome must have been planned by nefarious forces. Such “Hindsight Conspiracies” are part of the news cycle these days – despite almost always being pathetically wrong. 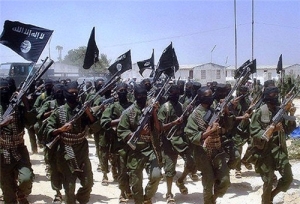 Why would the US create something like ISIL? The threat has certainly gathered together diverse Arab states into another coalition led by the US, which now has returned, yet again, to Iraq. If you believe in conspiracies by governments like the US, that’s nearly proof enough.

Then again, we did train and arm the enemies of Bashar al-Assad, and some of that went to ISIL at least indirectly. Aha, there’s proof!

But there’s a lot more squishy “proof” than that, some of which is found in Secretary of State Clinton’s memoir “Hard Choices”. Her discussion of how the “Islamic State” came to be recognized through her efforts is widely cited as proof – utterly out of context from her clear references to post-Mubarak Egypt.

This is typical of the development process for a Hindsight Conspiracy. People scour sources on the internet and elsewhere looking for signs that they should have seen coming, rip them out of context, and offer it as proof for the conclusion that they formed even before they started looking.

The most common examples of this are 911 “truthers”, a group well known to most Americans. They still pour over videos and official papers looking for proof that the US government was behind 911. Why? Because when you look at the net result of that event the most important gains in influence and power were realized by our military, security, and intelligence sectors. Since it was their gain, they must have planned it – and all you have to do is find the evidence. 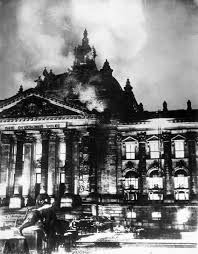 The burning Reichstag. Ultimate proof of all Hindsight Conspiracies?

The backwards logic of Hindsight Conspiracies is almost impossible to dispel, stretching back to one of the great classics. The fire at the German Reichstag, or Parliament, in 1933 was used as an excuse by the minority Nazi Party to gain power for the stated (and popular) purpose of “restoring order”. Many people think they set the blaze, but there is far more evidence that a lone communist did it. The Nazis were certainly the primary beneficiaries. But that goes to the remarkably weak, but true, counter to Hindsight Conspiracies:

Certain prepared and determined organizations are ready to take advantage of nearly any situation, unless they are stopped. Utterly random events of chaos favor them unless forces of stability and democracy have equal leadership and preparedness.

There is another counter to many Hindsight Conspiracies that is a bit more fundamental. Anyone who organizes citizens for action will tell you (and any other potential recruit to the cause) that “one person can make a difference!” The role of this and how it is rejected by the conspiracy theorists is best shown by another common story, that of Ukraine.

In November 2013 protesters took to the streets of Kiev in an action that led to the overthrow of the pro-Russian Yanukovich government three months later. That action sent many looking back to find the fingerprints of the CIA or even NATO bent on “taking” Ukraine from Russia. Many incidents were seen through this lens and a lot of “proof” was offered to support this Hindsight Conspiracy. After all, the net result is Ukraine has come our way, yes?

In order to believe this, you have to believe that the thousands of people risking their lives in protests were paid dupes of the CIA – something which has been alleged. You further have to ignore the fact that Ukraine’s application for NATO membership in 2008 was dismissed, to the consternation of the Bush Administration, and eventually dropped to nearly everyone’s relief. And that Andrew Hodirevski in Odessa, Ukraine was linked directly to the theft of Target’s credit cards but has yet to even be questioned, showing how little influence the US has there.

No matter. The Hindsight Conspiracy tells us that because the net result is that Ukraine turned westward, it must have been directed by the CIA. The people who create these stories reject not only evidence to the contrary, they clearly believe that individuals empowering themselves through a movement is a naive concept.

Some of that cynicism is justified, of course, especially when some small groups obtain advanced weapons from great powers which can turn just a few thousand people into a global threat. And there is room to blame the US for the creation of ISIL just as there is room to believe that US interests are moving into Ukraine about as fast as they possibly can now.

But that does not prove that world events are driven by shadowy powers whose signatures can be found in hindsight. If the conspiracy theorists were able to predict in advance a cataclysmic event with some precision that would be something else. Hindsight? It’s always sharp – and with the microscope provided by the internet you can focus on just about anything.

Hindsight Conspiracies are a feature of today’s connected world, but they are usually ridiculous. We will have them around until those who share the stories lose their often rightful cynicism about the world and become more savvy about how nearly anything can be “proved” in the absence of context – the real problem with the news today.

One thought on “Conspiracy in Hindsight”