Will the Senate go Republican? Nearly everyone believes it is likely, and has for a long time. It’s hard to see how that will be any different from today, given the ability to filibuster absolutely anything in that body.

Beyond Democrats and Republicans, there is a third option that is growing – some kind of independent fueled chaos and perhaps a heavy dose of Joe Biden in the works. The possibilities are absolutely delicious for many reasons. Not only would it give us all something to write about, a Senate in chaos would probably more accurately reflect the mood of the nation. Here’s how it goes.

We need to start with the possibility of Republicans taking the Senate outright, which remains likely. The New York Times has identified 46 safe Democratic seats and 48 safe Republican seats at this time. Only 8 seats are really in play.

As of today, the most likely result is 52 seats Republican. But there are catches to that.

Of these eight seats in play, one is North Carolina. Senator Kay Hagen is starting to pull firmly ahead of her challenger, Thom Tillis, and looks more and more like a solid Democratic win. From there, a state by state analysis gets really intense.

The most interesting race in the nation is in Kansas, which never elects anyone but a Republican. That’s why when independent Greg Orman started polling well against Republican Pat Roberts the Democrats pulled themselves from the ballot. Orman has been leading ever since and is favored. The hard pull to the right during Brownback’s term as Governor hasn’t worked well for Kansas and they seem to really want to go independent. 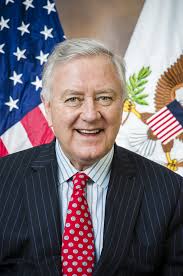 Larry Pressler, the man of experience running as an independent outsider. This could be the start of a trend – especially if he wins.

Something similar is happening in South Dakota, where longtime Republican Senator Larry Pressler is running as an independent. He’s pretty far behind in the polls but gaining – and a lot of observers now think he has a chance. Could it happen?

Remember that we have two independents in the Senate already, Angus King (ME) and Bernie Sanders (VT), who both caucus with the Democrats. The possibility of a genuine 4 seat Independent Caucus as the swing vote would be breathtaking. For this to happen the Socialist Sanders would have to be welcomed by his colleagues, but we can’t rule out his genuinely independent streak and desire to get the Senate to actually do something.

If something does happen in South Dakota, the most likely outcome starts to look like 51 Republican seats. One more real surprise would make that 50/50, allocating all the independents to the Democrats, meaning that Joe Biden becomes the critical tie-breaker. Given how close Iowa and Colorado have been running, this remains a possibility.

It’s up to the Democrats to gain momentum right now, but it all runs up against the potential wall of independents. As always, it comes down to turnout – which has always been the bane of independents. Pollsters might find support for an independent candidate but those supporters are usually the least well attached to the process and the least likely to actually show up.

If the Senate does flip solidly Republican it’s hard to say just what will change overall. But a very close Senate with a solid core of Independents who are organized and active would be something very new and very positive – at least for Joe Biden.

It’s really up to the Democrats to move the races in Iowa and Colorado firmly their way to make this happen. There is no good math that gives them the edge without independents no matter what, so a reliance on a growing group of independents is almost certain. But there are more possibilities in play than anyone can really contemplate.

Chaos of some kind is probably in the cards no matter how we look at it, given increased Republican power and a likely inability for President Obama to get any nominations through. What we can say for certain at this time is that by 2016 a key issue for the Presidential election is making Washington work once again, since we are very likely to have two years of absolute gridlock in every way possible.

History will probably look back on this period of time as a great transition. Where exactly we are going isn’t going to be decided this time. Dysfunction and disorder is the most likely bet all around.