The plotters are angry that their faith is persecuted and decide to strike back. Their plan is an outrageous act of terrorism, the destruction of the entire government in one big explosion. Fortunately, it is foiled in time but as news of the conspiracy leaks out the population is enraged. Soon, every member of this minority religious faith is viewed as a potential terrorist and things only go downhill from there.

If this sounds like today’s news, it isn’t. This is the story of the Gunpowder Plot of 1605, when Guy Fawkes led a Catholic group to plan the violent and public destruction of Protestant King James I and the entire Parliament. It reverberated through years of increased persecution of Catholics in England and all her colonies – including what became the United States.

And every year it is still celebrated on its anniversary, the Fifth of November, when Guy Fawkes is still burned in effigy in bonfires across the UK.

The plot was a simple at its core. A tunnel was dug from a nearby building to the Parliament basement, where 36 kegs of gunpowder were placed. It was enough to blow the building to pieces, and if set off during the King’s Speech it would eliminate the entire government in one big blast. One of the plotters got cold feet and ratted them out, and Guy Fawkes was caught red handed. He didn’t confess at first, but after torture the plot completely unraveled and Fawkes was hanged for attempted regicide, the most heinous of crimes.

The Catholic conspirators felt that they had to do something this radical in order to steer England away from Protestantism, which everyone hoped would die with Queen Elizabeth two years earlier. It didn’t. This was something of a last stand for Catholics who had endured persecution as potentially disloyal subjects once the Church of England was established and then expanded.

But it was the public reaction that lit the fires that very much still burn today. After the Gunpowder Plot, every Catholic was viewed as more than just disloyal – they were a threat to public order in the most horrible way imaginable. They were all potential terrorists who might strike at any moment. 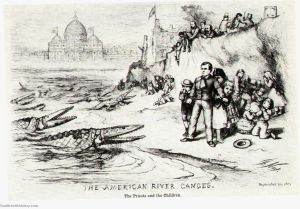 “The American River Ganges” by Thomas Nast, Published in Harper’s 1871. Click for a larger view.

A hundred years of struggle between Catholics and Protestants followed, more or less culminating with the “Glorious Rebellion” that installed Protestant William of Orange in 1690 over Catholic James Stuart, the rightful King. The complete subjugation of Catholic Ireland followed and the United Kingdom was fully Protestant.

We inherited this anti-Catholic bias in the United States. When Irish immigrants started to show up in large numbers in the 1850s there was a terrible backlash against them. They were poor, dirty, and always considered potentially disloyal as their primary alliegence was to the Pope. No less a figure than Thomas Nast, creator of the Democratic Donkey, Republican Elephant, and Santa Claus as we know him penned the cartoon shown here, published in the very popular Harper’s. Anti-Catholic bias was completely mainstream.

Meanwhile, every Fifth of November, the bonfires continued on Guy Fawkes’ Day. It turned into a big party, with people wearing cartoonish Guy Fawkes masks and at some point adding fireworks to the event. Kids were encouraged to build their own “Guy”, old clothes stuffed with leaves, that was later burned. It’s a big party, something like Halloween and the Fourth of July rolled into one.

It resonates in other ways, too. The Guy Fawkes masks were picked up by a cartoon, “V for Vendetta”, and through that became the symbol for Anonymous. Guy Fawkes has become mainstream as a symbol of resistance to government more than a Catholic terrorist today. And yes, the word “guy” as a generic term for a hapless man, later just any ordinary man, comes from Guy Fawkes. 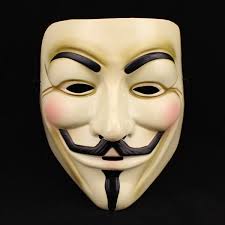 A Guy Fawkes mask, as used by Anonymous.

But the parallels with today’s attitudes are the most striking. A few terrorists striking back against persecution tarred an entire faith with suspicion and hatred in popular culture. It isn’t an English thing, per se, but a very human response that echoes to this very day. Moslems are viewed by many as potential terrorists because of the horrific actions of a very small number of people.

How will 9/11 echo through our culture? Will it result in a hundred years of conflict and hundreds more of persecution? Will it still be remembered 400 years on in some kind of party that takes twists and turns into family fun with the kids, divorced from its original meaning?

History doesn’t exactly repeat, but it rhymes like a street rapper hitting the beat. The only question is how many people will dance to it.

Remember, remember, the Fifth of November
Gunpowder, treason, and plot!