Oil is the most traded and shipped commodity in the world, amounting to a total of 90M bbl per day total production – 33B bbl per year or nearly $1.5T even at today’s low price. There is nothing more critical to a developed or developing economy than to keep things moving, which is to say this vast ocean of oil is critical to the economy as we know it today.

You’d think with such a steady supply and critical demand that the price would naturally stabilize according to the natural laws of supply and demand. Apparently, oil greased its way through that semester of economics.

Where will the price of oil go from the decades-long low of $45 per bbl that it is today? The short answer is that no one knows. The long answer is that anyone who hasn’t been cashed out of the game is betting that it has to go higher, but no one know when or how high.

Barataria first made the call when oil was starting to slip off the $90-$110 range for West Texas Intermediate (WTI). The thought then was that it couldn’t go much lower than $80 per bbl because oil wells throughout Texas, Oklahoma, and a few other states that had been come online at that price were economical at the magic $80 mark. Classical economics predicts that they go off, the supply goes down, and the price goes back up. Simple, yes?

Wait, this is oil we’re talking about. Nevermind.

Before we go through the scenarios that are starting to play out it’s worth noting how we can convert any price for WTI to a net gasoline pump price here in Minnesota. Divide the WTI by 42 gallons/bbl and add $1 per gallon for refining, transportation, and taxes. Prices in California are about 25 cents higher, in Texas about 20 cents lower.

Where are we today? WTI has stabilized at $45 per bbl ($2.05 pump gasoline) and have been there for nearly a month. It seems to be the real floor that we were all looking for. The floor was found not so much by a decline in production, however, as it represents a level at which refiners are willing to start stockpiling and absorbing the excess that is still flowing in January. 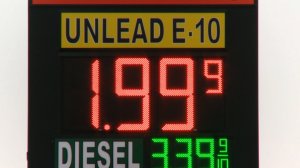 A common sight throughout the nation lately.

For this reason, some have speculated that this is only a bump and the price could dip as low as $30 per bbl ($1.72 pump), which is the estimated cost of production in Saudi Arabia. No one believes that the Saudis would sit at zero profit forever, and everyone agrees that nearly all other producers would start switching the pumps off at that price. So if it does dip any lower than it is today it won’t stay.

The next plateau, should prices rise this summer, is $80 per bbl ($2.90 pump). This is the threshold for the US throttling back, a process that does not seem to have started yet. Very few people think that it won’t be back to this level by summer, but we’ve all been wrong before.

The long-term threshold is still $100 per bbl ($3.40 pump). This is the price where oil was stable for a long time, and most governments used as a planning number. It goes up and down 10% from that, which is still ridiculous, but it beats today’s volatility. Over the long term, say two years, most analysts still think this is the equilibrium.

OPEC Secretary-General Abdullah al-Badri wants to talk the price of oil up.

Then again, it could snap back if all the wells in all the world turn off at once. OPEC’s Secretary-General Abdulla al-Badri says this is a possibility in what is clearly an effort to talk up the price. His call is a rebound as high as $200 per bbl ($5.75 pump), a number that no one seriously believes. But it’s out there.

To figure out which of these plateaus for the price are most likely, we have to look at what is driving the price today. It’s not about excess production as much as it is about reduced demand due to a weak global economy and the strength of the US Dollar, which all oil is priced in. Those trends will not reverse quickly, and if anything the Dollar is expected to continue strengthening. The latter is why the long-term price is more likely to stabilize at $80 per bbl rather than the $100 per bbl we had for years.

Economics has too much hand-waving to be an exact science. But it tries.

What has to happen is that production has to fall to match the reduced demand. This doesn’t happen quickly because of a critical market failure – sunk costs. Investors put up money to turn an oil well on, and the well has to make that money up before the operators are willing to turn it off. With low prices, that requires even more pumping, not less.

The key is when oil well operators either can’t finance their wells anymore and give up, leaving investors holding the bag. That hasn’t happened yet, but must eventually. This is the main reason why oil prices are incapable of responding quickly to changes in the market.

Where is the price of oil heading? Most big bets are being placed on $80 per bbl or about $2.90 at the pump in the middle of the nation. The best bet is that we’ll hit that by the end of summer. But it could be much better or worse than that as the market remains in turmoil.

Not a good thing for the most important traded commodity in the world.

20 thoughts on “A Slippery Commodity”