When Pope Francis came to visit Congress, everyone knew something big was going to happen. Causing Speaker Boehner (R-OH) to have an epiphany and resign was not on anyone’s list.

But, there you have it – a Pope that works strange miracles.

To say that in the aftermath all Hell will break loose depends on whether your definition of Hell is complete inaction (it probably should be). By that standard Congress has been deep in the fire for a long time so we can’t blame Boehner for seeking a cool escape once he was touched by His Holiness. But is there a way out for the rest of us?

It’s enough to make Boehner cry. Wait, no it’s not.

It’s customary for Democrats to say wonderful things about Boehner in the aftermath of all this, largely because many Republicans are saying horrible things about him. The Values Voter Summit broke into a cheering standing ovation at the news, broken by a visibly upset Sen Rubio (R-FL). They hated Boehner because he represented everything they dislike about Washington, which is …

you know, I can’t figure out why they hated him so much. They blamed him for nothing getting done, apparently believing that if he was only willing to go nuclear all the time that somehow the Democrats and moderates would cave and all kinds of Tea Party legislation would go through to an inevitable veto.

It’s as if those who tend to venerate the Founding Fathers the most are the least likely to understand the work that they did setting up a system that requires consensus, built largely through compromise. 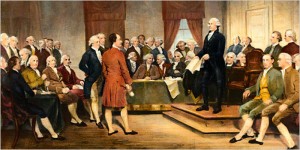 As we’ve noted before, Boehner has been under pressure from this group for a long time, despite their status as the controllers of a mere 11% of the seats in the House. How they expect to leverage this into a veto-proof supermajority through force alone is a complete mystery. It was to Boehner, too, who has been around long enough to know that you get things done by working together.

It’s very clear that the strain wore on the Speaker, dissolving finally in an ecstatic wave of peace when Pope Francis asked him, “Pray for me.” The message of following your heart and finding the Holy Spirit within you did overwhelm at least one prominent American during the Papal visit.

What comes next is anyone’s guess. Kevin McCarthy (R-CA) is the odds on favorite largely because he has told everyone in the caucus he will take a more forceful approach with Senate Majority Leader Mitch McConnel (R-KY). In other words, they are still focusing on members of their own party as the problem and the bloodletting will continue. That won’t produce anything worthwhile in the next two years but it may make inter-party fighting far more public.

That is the key variable heading into an election year. Very public battles are likely to use up or dry up the Republicans’ main advantage – big piles of money.

We can’t be sure yet how much of this will be fought out in public so we can’t gauge the damage. If it hardens the voting constituencies this could have a big influence over the Presidential election as well, as it may be already. That’s what we have to watch for.

There is also the big question as to how Democrats need to place this, or for that matter how they can.

Feel the Bern? That flame has to last if he’s gonna do it.

To a large extent, standing back and letting Republicans hang themselves will be good. However, there appears to be a large opening for the Sanders wing of progressives in a tactical sense. A no-nonsense approach based on cleanliness and honesty will seem especially refreshing next to an inside game gone horribly wrong playing out in the other party. The more the Democrats can contrast themselves, the better.

As usual, the party that demands some faith in government has to show it is capable of running it, too.

There is a lot of time for this to play out so the details will become obvious over time. The next Speaker will have to stand up and make himself known, and how that will progress should become obvious. The reaction of the Republican establishment will be the next thing to watch, particularly Jeb Bush and McConnell. After a quarter or two, we’ll have some financial reports that show us where the money is going.

Boehner’s resignation was a long time coming and the process it sets off will take a long time to play out. It’s a better drama than anything on teevee, too. Make popcorn – lots of popcorn.