Pope Francis has arrived in the United States.

The focus on his Holiness revolves around his challenges to the American right, something that largely misses the point. There will be admonishments to the left as well when he addresses Congress and the people of our nation – and those will likely be reported with a hint of glee in the press as they search for an “objective” sense of “balance”. But that, too, will miss the point.

Francis challenges all of us to step outside of our bizzy lives and see the world as a beautiful place. The message is that it is time to stop and see creation for what it is.

“Wait until you see what I have for you!”

The problem with our contemporary thought, expressed through politics, is that our lives are governed by matters entirely of the head. Systems, ideologies, economies, philosophies, all of the things that matter to us today begin and end with the basic idea that we can think our way through life. Feeling, or at least an intuitive understanding that starts in the guts, isn’t “rational” enough for our world.

The watchword is “logic” – even though most of what we talk about has nothing to do with logic at all.

We are supposed to be rational actors in every thing that we do, says our common culture. Even those who claim to be highly spiritual emphasize more being “right” by the various laws of the Almighty as they suppose them than by the direction that their faith commands. Rationality is used to justify everything, which is to say that a close examination of our hearts is strictly forbidden.

Nevermind starting from our hearts and branching out from there. 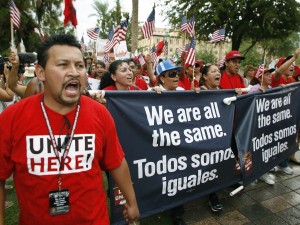 People are here. Deal with it.

An issue that illustrates the problem with this clearly is the problem caused by 12 million or so undocumented or illegal immigrants in the US. Logically, this is a serious problem because they cannot participate in the fruits of citizenship and the entirety of society. But many people have a fear of these immigrants that can only be called irrational, calling them to be “shipped back” in some unnamed operation that would exceed the deportations and exterminations of the Nazi era. Logistically, it can’t happen. Where is the logic in any of that reasoning?

Yet supporters of this position will tell you that laws must be enforced, the situation cannot stand and a whole host of other seemingly “logical” positions. They are speaking out from their hearts while simultaneously denying their hearts a clear voice.  The result is mostly poison.

Let’s go back to 1980 in this debate between Republican Presidential candidates George HW Bush and Ronald Reagan. Both men come to strong logical conclusions but clearly start from their hearts. Their positions were once in the mainstream of their party but today cannot be recognized.

What does this have to do with Pope Francis? More than anyone might think. Starting from a love of all creation the philosophy of the Church, which really hasn’t changed in a long time, arrives in a different kind of “logic”. It is one that reinforces the needs of the heart to find beauty and peace – to have a good life. 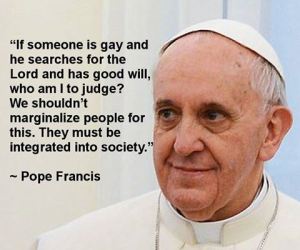 Holy Father, how will we do that? Can we think through this a bit?

Naturally, my many friends who disagree with the Church on matters like marriage equity will reject this analysis. I have to say that Pope Francis and his church need to also re-examine their logic and see where it has taken them, something which Francis appears to be doing – slowly, on this issue and on the role of women in the church. There is room for him to grow, too, and his growth may yet be his greatest example for us all.

But overall the “politics” of Francis appears to disturb our order for a very good reason. Everything in our world starts from a place beyond the heart and the spirit, moving on to justify the strange emotions which lash out to the world with suspicion and hate, reasserting itself as little more than selfishness.

Logic itself becomes twisted by asserting it where it does not belong.

Where Francis is coming from is best summed up by the apocryphal Gospel of Thomas, a collection of early church writings that I am sure he is familiar with. Thomas, it may be necessary to explain, was the one who doubted Jesus’ return at first – he wanted proof. Let’s call him the intellectual among the disciples, the one whom Jesuits like Francis could easily identify with. In a fragment of text dated to 340 AD Thomas is credited with writing:

Jesus says: “Let him who seeks cease not to seek until he finds: when he finds he will be astonished; and when he is astonished he will wonder, and will reign over the universe!” 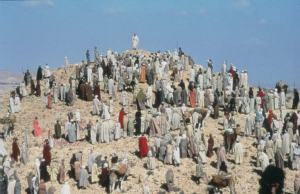 Comfort the disturbed, Disturb the comfortable. As long as they all listen …

Disturbing us out of our comfort zone is only the start for Francis. His sense of logic, the operating system of the head, must have a dialogue with the heart. Each informs the other with an overall sense of wonder – the spirit that stands apart. From this anything is possible and the world is ours.

Is Francis a challenge to everyone? Oh, yes. He is challenging everything in our world starting right at the very core. He places at the start of that the love of the heart and a quest for truth in the head. Francis teaches that they come together in a sense of wonder at all the possibilities which nourish the spirit that binds all these parts together in a complete person – made in the image of the Creator.

That’s hardly a political message, but then again it’s nothing less than the most necessary politics of our time.

This post has links back to previous discussions of Pope Francis and his work, along with related topics.