Last Friday the monthly Bureau of Labor Statistics (BLS) Employment Report came out, and it was lousy. Instead of an expected gain of 200k jobs it came in at 142k – a miss of 58k or 29%. The reaction in the financial press was swift and conclusive – there is no way the Fed can raise interest rates given this weakness. But there’s a bigger problem with the report than that.

It honestly can’t be believed.

It’s fashionable to say that the BLS cooks these reports to get the results they want and that no one should believe the government reports in general. That’s a general paranoid delusion that is utterly unreasonable all around. But the reports can’t be taken as pure gospel when they don’t come in exactly where they should be because there is no way they can possibly be as accurate as is demanded.

Could you please fill out this survey? Thanks!

Every month, two reports come out on the employment situation. The first one to come out is the ADP employment report, published by the private payroll company that handles about 10% of the total payroll for businesses large and small across the US. The second is the official BLS report that everyone watches much more closely.

These two reports should be the same except for hiring by government, which is not counted by ADP.

Other than that, the most important difference between them is how they are compiled. ADP has access to a very large sample of actual payroll data which they extrapolate out to a close estimate of the results for all private industry in the US. This report has only been available since 2001 because that was about the time such heavy number crunching became affordable for what is really only a sideline to ADP’s main business – writing checks for about 14M employees.

The BLS methodology was established just after WWII and is largely unchanged. It’s called the “Establishment Survey Data” because they literally call up companies and have them fill out forms telling the BLS just what happened in the last month. It’s a statistical survey of a smaller pool compiled much more manually than the ADP method.

Both methods are “seasonally adjusted” to create what should be a smooth monthly curve independent of the dramatic unemployment that comes every January.

Here is a graph of the net change in employment, month by month, since the low point in 2010. ADP is in blue, BLS is in red:

Note that they seem to be describing pretty much the same data with one big exception – the red line is a lot noisier. The ups and downs from one month to the next are much more pronounced in the BLS survey. By adjusting the same graph to be a net yearly change, taking out most of the noise month by month, we can see how closely they track overall: 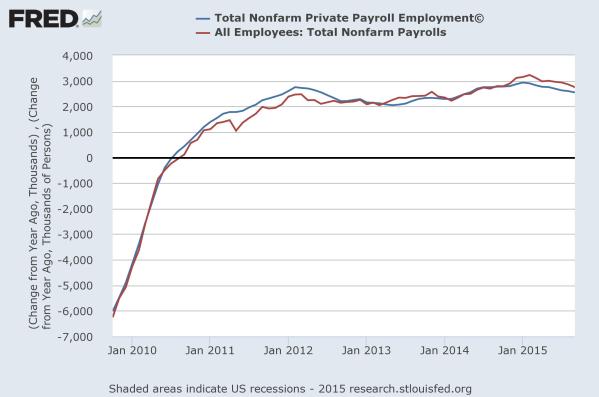 ADP (blue) and BLS (red) monthly employment reports as a net annual change each month since 2010. Data from the St Louis Federal Reserve.

The correlation between them is 92% on average, so they definitely represent the same set of data. But the BLS is much noisier. 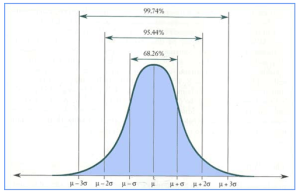 Statistics can tell us a lot, but it also tells us the limits of what it can tell us (when we pay attention).

This has to be expected given that the BLS uses a statistical model. The net change in jobs each month is indeed on the order of 200k. That’s found by taking the total number of jobs found in one month and subtracting the previous. Given that there 142M total workers, that difference represents 0.15%. A statistical model that is that accurate is very hard to imagine, which is to say that it is amazing that the BLS gets as close as it does.

A miss of 58k is a difference of 0.04% overall. It’s almost certainly within the noise of the BLS report, although we don’t have enough information to understand the margin of error that precisely.

Should we panic over the terrible miss in the September employment report? The short answer is that we have several pieces of data to evaluate it against. The ADP report came in at the expected +200k. Previous months came in at a net similar result, on average, as well. Without any solid reason as to why things may have changed there is no reason to believe that the miss of 58k jobs is statistically valid.

That won’t stop the financial press from reporting the September employment report number as if it is far more accurate than it really is. After all, it is the official number. But it simply cannot be believed – not because someone is cooking the books but because such precision is simply not possible with the methods employed.