The Feds are about to run out of money.

No, we’re not talking about a government shutdown – that was avoided when yet another continuing resolution was passed to keep it operating through December. After that we have no idea what will happen. What we do know is that the Federal Highway Trust Fund is set to expire on October 29 unless a new bill is passed, which hasn’t been done yet.

Unlike the larger federal budget the attention this is getting is scant at best, so the possibility that it will be lost in the shuffle is pretty high. The implications are rather vast because federal funding is what keeps highway construction moving along. Without it, everything might grind to a halt as early as November.

Don’t look, it’ll only depress you.

Since our federal government has not passed an actual budget in six years, nothing should come as a surprise anymore. In place of actual fiscal responsibility absolutely everything has been extended one or two years at a time by essentially writing checks without ever looking at the checkbook balance. It all comes out in the dirty laundry, which is to say the bonds floated to keep it all keepin’ on.

Part of this is the Highway Trust Fund, the ultimate destination for the $34B or so that comes from the 18.4 cent per gallon federal gas tax, last raised in 1993. But the feds spend as much as $50B every year on highways. The Trust Fund has been re-authorized every year and a number of projects approved without any regard to how they are funded. Since 2008, a total of $35B has been put into this fund from general tax revenue, but it is still not enough.

The commitments authorized already will deplete this fund entirely in November, according to the most recent estimates. 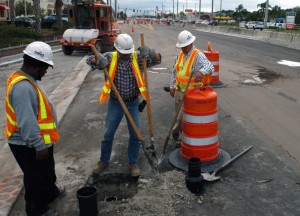 This patchwork is what maintains the Interstate Highway System and other Federal Highways across the nation. States and sometimes local governments put some into the put for their roads, but the commitment from the Feds has always been a key part of the equation. The funding can at best be called unreliable, but the need for constant Congressional scrambling to authorize projects and keep some money in the kitty has made it utterly capricious and subject to political pressure more than actual planning.

The situation utterly alarms many in Congress on both sides of the aisle. Rep Tom Rice (R-SC) has called for a 5 cent per gallon increase in the gasoline tax to top the tank back up after inflation since 1993, but his plea appears to be falling on deaf ears. It’s hard enough to authorize the Highway Trust Fund in this environment, let alone pass a tax increase.

Let me repeat this for emphasis: a Republican Congressman from South Carolina wants to increase the gasoline tax. It’s that dire.

It’s not as though anyone will notice a nickel a gallon, given that gasoline prices often vary that much from week to week and between stations within a few blocks of each other. There is the principle involved, naturally, in the form of a pledge for lower taxes as we approach an election year. The headlines are far more likely to be noticed than the actual tax in this environment, meaning that once again the practical need to maintain vital infrastructure is likely to be lost in the process of posturing.

For all this, likely incoming speaker Kevin McCarthy (R-CA) has said that he will pass a six year highway funding bill. But he favors dedicating revenue from corporate overseas taxes, sometimes called the “territorial tax”, to plug the gap. He has not offered any reason why this is preferable.

Will the Highway Trust Fund be re-authorized? The short answer is that it’s likely, but the pressure is hardly on from the media to get it done. Unless something changes even an authorization today will probably leave the fund without the dedicated revenue stream that is required for long-term planning by the states that perform the actual construction.

Unlike the larger federal budget, the Highway Trust fund debate is passing largely below the radar. It just one of the many ways that the federal government is essentially running on empty. This one, however, affects nearly everyone in this car-dependent culture.