By the time you read this the first Democratic debate has probably already happened. I hope you enjoyed it!

There is a tradition here at Barataria of predicting the news before it happens, which is to say at least outlining what is likely to happen within reasonable boundaries. It’s more like a weather forecast than a news forecast. So let’s take a stab and see what we can reasonably expect from the debate itself and the news going forward.

Mostly sunny with a high in the 70s. No, it’s more complicated than that … 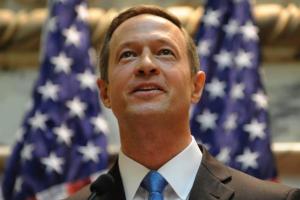 The news always likes to pick a “winner” from these events in order to keep up the image that this is nothing but a contest. Debates are a boxing match, polls are a horse race and reports on campaign finance something like an IPO. In order to maintain any cred at all Barataria has to start with the winner of the debate and then move on, so the winner will be:

So much for establishing cred, eh? But he comes into this debate a complete unknown polling somewhere around the margin of error. He deserves much better even if he is secretly only running for Vice President, as many of us suspect. More importantly, he has an appeal to mainstream not-so-progressive Democrats who are more interested in a functioning government than any new policies. If you liked Mike Dukakis, you’ll love O’Malley.

Data driven government is a wonk’s dream. But it’s hard to talk about.

O’Malley has one big schtick, which is what we call “Data Driven Government”. It’s about picking goals and laying out a strategy for achieving them, using data to measure advancement to those goals. He is not particularly likely to go into his fifteen goals during the debate because much of this is a wonkish snooze-fest to the average voter but this will come up. Expect him to emphasize his action on gun control as governor of Maryland and other lefty issues more – but the wonky part will come out.

I think he’d be an excellent Veep, BTW, especially with his own assignment as a kind of director of government reform.

Now that this“winner” nonsense is out of the way, we have to confront the main event – Clinton vs Sanders for the heavyweight title. Like most boxing matches this will be rather boring but unlike them it should be remarkably friendly. Clinton will come out trying to be warm and friendly, spinning as much “in-touch with the average American” homespun charm as possible. Sanders will be basically the same guy he is on the campaign trail, describing what needs to be done to turn the nation around. But they will not directly attack each other and instead attack the Republicans all around.

It’s going to be their world, probably all at once.

The real winner? Democrats. Hopefully this will energize everyone and set the tone for a campaign of genuine unity.

Yes, Chafee and Webb will be there, too. They may be more inclined to attack but it won’t look like anything important. The press is very likely to call the whole event “boring” but that will only be true to the extent they want a real fight. It won’t happen. Neither Sanders nor Clinton would benefit from anything other than respectful disagreement of the kind you see on the floor of the Senate and the rest of them won’t look very presidential if they swing too hard.

We can also expect a hard turn to the left from Clinton, at least in terms of what people expect from her. It would be really cool if she admitted she was wrong about something, possibly free trade or the Crime Bill of 1994 which accelerated mass incarceration in the US as that would demonstrate her humanity and statesmanship. For her sake, and I do want to support her, I hope this happens.

What will the net result be? Absolutely nothing new except for a stronger presence by O’Malley as the press gets off the Joe Biden kick and realizes that it’s not just the frontrunner versus the progressive insurgent. If Democrats are lucky the contrast between them and the Republican debates will be the real story, which is to say a group of people who all look very presidential and united versus a pack of snarling animals.

Other than that we should expect no changes whatsoever in the polls or in the tone. It’s still very early and this only establishes a baseline. All campaigns will play it rather safe and play rather well. It’s a good time to be a Democrat.