The bombing on Sunday by Ahmad Khan Rahami has left behind a large number of questions. Why did he do it? Was he directed in any way? How was he “radicalized”? How did he get past the FBI? There appear to be a few answers to what was clearly a “lone wolf” attack not directed by Da‘ish (ISIS) but clearly inspired by them, and not many answers are satisfying.

It seems that we will have to get used to these attacks, which is a chilling or angering thought to many Americans. For that reason, the resonance of this attack in the wake of the Orlando Pulse shooting and a stabbing in St Cloud, Minnesota has a greater effect than the more deadly coordinated attacks in France. Da’ish is leaving it’s mark.

But what will this mean in an election year? We can’t say yet. The possibility that this may play into Trump’s hands is even more chilling, as that would mean lasting damage to the US. 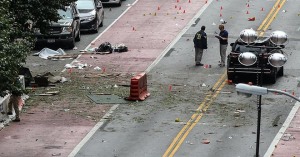 The aftermath of the Chelsea bombing – mostly people standing around confused.

The strangest thing about this attack is that Rahami was indeed known to the FBI. He was a suspect in a stabbing in his own family, and his father reported him as a potential terrorist. This is an important point because this plays directly into Trump’s main argument concerning Moslems. If we can’t stop the radical ones once they are here, even if we know who they are, why are we letting them in?

That may play very well in a population that is already wary of Islam. A Reuters poll of 7,000 Americans taken last July shows that 37% of all Americans have an unfavorable view of the faith versus only 18% positive – a net of -19 overall. Of course, most of those who have a negative view of Islam are already Trump supporters, so there may not be a strong effect. It’s also worth noting that Atheism also came out 38/20 against, with a slightly better -18 score.

We can be sure that this will play in the media for a long time. It certainly does not seem like an isolated incident, even if it is another “lone wolf”. 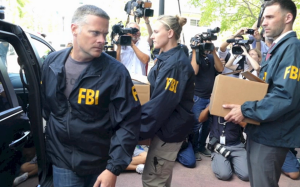 We have every reason to believe they are doing their jobs well.

Which naturally brings us to the most important, yet difficult point to make. There has not been a single terrorist attack in the US which was coordinated abroad since 9/11. We can be sure that some attempts have been made, but how many? A few? Dozens? How were they stopped? Something is working, for sure. Da’ish probably only turned to the “lone wolf” incitement after everything else they did was thwarted. Indeed, the attacks in France were more indicative of one cell at work, not a worldwide network.

Something has gone right, but exactly what has to remain mysterious so that it can keep going.

Which turns us to the next consideration as we absorb the social impacts of such events, namely the tendency for Americans to turn towards established, strong leadership in the wake of terror attacks. There is little doubt that Federal spying and prying has increased dramatically after 9/11, but few Americans seem to be greatly concerned. Security is important.

Traditionally, this turn towards authority has favored Republicans. This time, however, Trump is running as an outsider and Clinton as an insider. A CNN poll last June showed that Clinton is seen as the stronger candidate to handle terrorism by 50/39, which appears to be her base of support plus the small number of people who haven’t yet made up their minds in this election. This is very unusual, to say the least, but it does appear consistent.

In a chaotic world it is natural to turn to the candidate who can stand strong and consistent. This will be Clinton’s main goal in the debates, which start in less than a week. Everything we know now about this election may yet change through the debate cycle, where a close look at the two candidates will allow immediate and intimate contrasts.

There is little doubt that terrorism will be an important topic, and it is up to Clinton to own that issue.

Beyond that, there is still the possibility that Da’ish will be defeated, or at least critically wounded, before the election. With the truce in Syria everything is in place to make this happen – including hundreds of Turkish tanks and well trained soldiers poised to move on the Da’ish capitol of Raqqah. That will certainly turn the terror issue towards Obama and thus to Clinton, who is for better or worse running as something of an incumbent.

Does the rising specter of terrorism favor Trump or Clinton? Probably the latter if Clinton can gain control of the issue and events in Syria. This has to play out to be sure, but it is probably hers to lose.

5 thoughts on “Terror Sinks In”