The process of the world coming together has been irregular at best. It seems reasonable that through it all there would be winners and losers, as we have seen. What is remarkable is how globalism, as a concept and a reality, has divided the developed world. Working people with less access not only feel left behind, in many cases their standard of living is actually slipping.

It seems as though there is a fundamental flaw in globalism. Yet the flaw may be in how we approach not just globalism, but the forces which created it in the first place. What if the process of the world coming together, driven by market forces, is fatally flawed because of our inadequate understanding of marketism?

In short, what if the transition from an industrial world to a market based world is not as seamless as we want to believe?

Just after World War II, the United States was alone on top of a ruined world. We survived not only intact, but stronger thanks to tremendous public and private investment in industrial infrastructure. The only potential downside, realized in a series of short but brutal recessions in 1947 and 1958, was a lack of demand for all the goods that the United States could produce.

Industrial methods were employed to take care of this, of course. Tourism became an organized industry, as did education and entertainment. Advertising became the industry which drove so much of the others, as products were pushed out into the world and demand manufactured.

The concept is highlighted in the Twilight Zone episode “A Stop at Willoughby,” aired on May 6, 1960. An advertising executive is on the verge of suicide from all the pressure, and longs for a simpler time. “It’s a push, push, push world!” he is told, over and over. It’s all about pushing products. 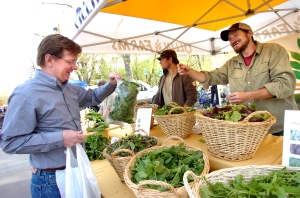 A free market.  If only it was all this simple.

This seems like no significant change at all according to standard rhetoric and dogma. Isn’t industry all about capitalism and a free market? The short answer is no, it is not. A conversion to a market based world does indeed change everything.

Industry, as a slave to the market, has to be flexible. Long-term relationships with workers are difficult at best as things change constantly. Engineers can no longer invent in isolation, but have to respond to market input. Most truly new ideas as come not from a “skunk works” inside a company, but from tinkerers in a garage operating on a small scale with little overhead. Financing does not come from a relationship with a bank, but form a global market of finance or a stock market.

A true market based economy is completely different from an industrial economy in many ways. Yet we have never understood it as such largely because of our own rhetoric. We have confused capitalism, where money finds its own way, with marketism, where people make decisions. We still measure trends in bulk, even workers, rather than emphasizing skills and the demand for them.

What will the consumer choose?

The difference seems subtle, but only because we have been taught that it is so. It is not. The conversion to a market based world from an industrial world defines the change which took place in the Managed Depression of 2000-2017. This was the process by which the old economy, based on industry, finally died off and a new economy based purely on markets rose.

What is the new economy, then? Saying it is defined by information is easy enough, but plumbing the depths of this is more difficult. Information is primarily about consumer choices, even those the consumer does not understand yet. Demand can be created, but information is primarily about understanding demand. It is essential to mastering the business world. Production? That comes later in some shop somewhere in the world, who really knows and who really cares?

Everything changes as a result. The nature of work is probably the most important. The nature of finance and how money moves around also changes significantly. Innovation itself is very different, based less on the need to maximize the utilization of machinery and more on the demand of the market.

Why is globalism failing? Don’t blame the child, blame the parent. The understanding of the world which created globalism badly informed the process because it has been mired in the past. A market driven world is very different from an industrial world. That’s the problem.

One thought on “Globalism Isn’t Failing. Industrialism Is.”