Electino Day is 6 November. There is likely to be a ‘blue wave” that will change the US House and many statehouses to Democratic control, but the Senate is not likely to change. The net result is almost certainly going to be entrenchment and gridlock, meaning that nothing is going to be done for the next two years.

It’s important to take a break from the description of People’s Economics to consider why this is likely the case, and why the repudiation of Trump will not be complete. The short answer is that while America would like to move ahead in a different direction, it simply has not been properly defined.

No one votes like this anymore, but the image stays.

When Democrats make big gains, we will all know exactly where they came from. It won’t be out of support for Democratic policies, but largely out of anxiety over the direction that the nation is going under the Trump and his supporters. There will be instances where individuals shine and are boldly elected on their own merits, as there are many strong candidates who have stepped up in the chaos that has befallen America.

But in all cases, the votes will be personal, not policy driven.

America, and indeed the entire world, needs new direction. The reactionary forces all around the world have been scoring large gains, including the recent one in Brazil, based on one over-arching problem. The transition from Industrial Nationalism to Global Marketism has been uneven at best, destructive at worst. Many people feel that the old system, or some polished and repurposed version of it, has better chance of working for them.

That is why People’s Economics, or something like it, is more important than this election. 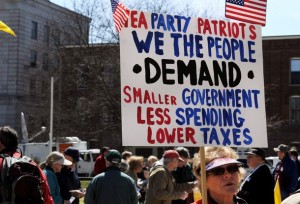 Americans are largely ready to go boldly into the future for many reasons. The most obvious is that the world is changing around us. The other is generational, in that a new generation coming of age with new ideas is about ready to take their place. The most important, however, is that we have always moved forward into the future once we have a firm understanding of the direction we want to go.

While the forces are there to push us ahead, there is no roadmap for where we need to go. Many old solutions are trotted out, still searching for problems to solve, in very half-baked ways and no clear direction. There simply is no coherent plan.

This is true across the planet at this time. America is far from alone in the anxiety which has fueled Trump, most commonly expressed by low voter turnout than any ratio of votes actually cast. If there was something to vote for, an actual plan, there would probably be more excitement.

Good, solid leadership and dedicated people with good morals are a great start for the Democratic party. That this includes more women and non-white people is also a huge benefit for the nation as a whole. But what they will be chartered with is nothing less than developing a plan for moving ahead.

A plan, not action. Action is likely to be impossible for a while.

What is most important about People’s Economics is not that it is a Democratic plan. It is nothing of the sort. In fact, there is a clear conservative and laissez-faire way of looking at the same principles, meaning that it should overall redefine all of our politics in both parties. It doesn’t even presume a democratic-republic, meaning that it has application in other nations in various stages of development.

This is what matters the most right now. We are not ready for action, and we are only starting to realize the need for a plan. What matters is not that one party has a plan, it’s that everyone has a way of moving forward once the reactionary nonsense and hyperventilation about “those people” is dropped. It will become tiresome, and intelligent people will move on – but remain relatively conservative. That’s fine, and our system never likes one party rule. It takes all of us.

At this time, the battle lines are being set for a long, exhausting trench warfare. It will test everyone, and leaders will become identifiable. But little else is likely.

The future is theirs. Let’s make it bright!

People’s Economics is intended to describe a perspective which allows mastery and definition of the global market for people of all situations, ideologies, and places. It is something that those who are tired of the trenches can look to as a break-out, regardless of where they are in the trenches.

People’s Economics has to be there when the world is ready for it.

That is not right now. This election is critically important for many reasons, but primarily it will be high-water mark for reactionaries in the United States. It will be the surest sign that something very different than what we are doing now has to be the way forward. But that message will not sink in for some time.

We have to be ready for when it does, and when the time for action comes.

Meanwhile, please go out and vote, and if you have the opportunity to encourage everyone to vote or to help someone get to the polls, please do. Our nation depends on engagement by the people. That is what matters the most right now, so please do your part.

One thought on “Mid-Term Entrenchment”