Understanding the changes that have taken place in our economy over the last two generations helps us to understand the nature of the Depression or near Depression we are in now.  The most important reason for this is that the way out of a economic downturn is a restructuring – allocating energy and money to something that has a real value to the world.  Think of it as a chance to go to our rooms and think about what we’ve done and what we’re going to do different in the future.  The other reason is that as we look to the last Depression for guidance as to what we should be doing, there are obvious limitations caused by the simple fact that things have changed.

I had a lot of comments from friends on my piece, “Build a Better Tomorrow”, outlining how the loss in manufacturing has caused income disparities.  I argued that the declining share of manufacturing in our economy maps very well with the relative loss of income of the working Middle class.

The best criticism I received was that I should look at jobs, not share of GDP.  That’s very good advice, though I wish it came in the comment section so that other smart people could respond (hint).  I will do that now in this complicated looking graph of data from 1959 to 2006: 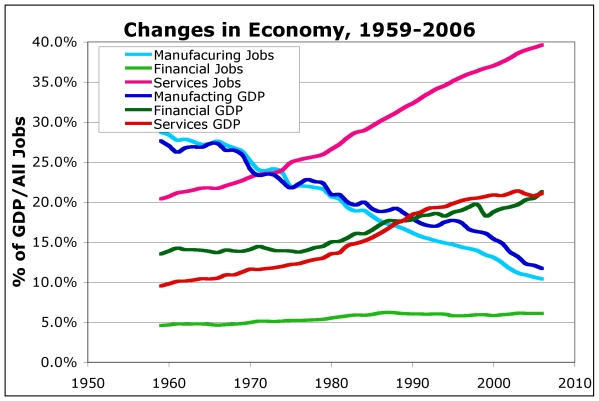 Once again, I will look at only Manufacturing, Finance, and Service sectors – the rest aren’t all that useful.  The lighter lines show the share of total jobs for each of these, as a percent of the total.  The darker lines are the share of GDP, which is the same data as before.

The first thing you’ll see is that these sectors are totally different in their behavior.  The share of manufacturing jobs and GDP form two lines that move together, meaning that each manufacturing job creates a share of GDP that’s very average over the whole economy.  The service sector explodes over this period, going from 20% of all jobs to 40%.  I should note that “service” includes health care, education, and anything that is involved with people taking care of other people for money; these aren’t all low paying jobs.  Finance nearly doubled its share of the economy, from 13% to 22%, but the share of total jobs hardly changed.

What does all this mean?

More and more people are employed in services, and the amount of income this sector generates per employee is less than the overall average.  That puts constant pressure on wages.  However, pay for service sector jobs recently passed wages for manufacturing on average, probably because higher paying services such as education and health care are growing faster.  Something is clearly out of whack.

The increase in the financial sector without much of an increase in the share of jobs is a tremendous increase in efficiency likely caused by computerization.  But it clearly shows that a greater share of the economy is relying on passive income – money received for manipulating money, not doing work.

At some point, any argument like this has to ask, “What is GDP?”  It’s nothing more than the total value of all the goods and services the economy is creating.  That has to be done at market value, which is to say what people are wiling to pay for it.  The increase in the value of all the services created ultimately has to be tied to the increase in passive income, especially since we have such a sharp decline in manufactured goods.  That leads directly to how an entire economy can increase its passive income without receiving it from abroad, since someone has to be paying it.

No matter how you think through this, our economy was ultimately based on someone else’s wealth or labor supporting us.  The major growth over the last two generations came from increased reliance on finances with almost no change in the number of jobs that were created.  Job growth came from services, and the demand for these has been so strong that there has been upward pressure on wages.

As we move forward, it’s clear that the passive income that supported our economy will not return; it is the sector that is melting down the most dramatically right now.  That will likely mean a reduction in demand for services as well.  The potential for job and income loss is significant given a likely return to a more typical downward pressure on wages in the service sector.

Restructuring this, which is to say adjusting to the new economic reality, will be painful.  But it cannot be avoided.  The Obama administration has focused on re-starting the financial sector, which makes sense, but it is unlikely to return to the same share of GDP it once held.  The services that were made possible by its previous largess will be unsupportable.  Once the worst of the financial situation is over, the administration will have to concentrate on keeping people employed – or at least fed.  Somewhere in here we’ll develop the economy that comes after the one pictured above has changed completely.