“Get government off our backs!” It’s a chant we’ve heard a lot of over the last few years, usually in the deep, gruff voice of those old enough to remember the heyday of our parents and grandparents. It’s a call to a simpler time when there was less government, less taxation, and more to go around. At least, that’s the story we are told.

But an analysis of the size of our Federal Government as a share of the economy shows that while it is a shade bigger than it used to be, it’s way below its maximum. There are peaks in Federal Government size which fit not to an increase in social benefits or productive spending, but the very expensive line item that has been pricey enough to bring down governments and cultures for centuries – war.

In short, it’s time for the progressive left to embrace “smaller government” of a kind and to show that world that peace is not idealistic but practical.

It all starts with this simple chart below. This is a graph of total Federal Government outlays divided by the Gross Domestic Product (GDP):

Total outlays includes everything, including off-budget items like the Afghan War and Social Security. It doesn’t take into account deficits or anything else – this is how much the Federal Government is a part of the total economy. 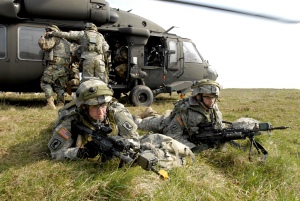 Of the six distinct peaks, 4.5 are definitely due to war or military buildup. The “OPEC Recession” of 1974 was a big one, depressing GDP badly. The big spike, to 24% of the economy, was due to the Afghan and Iraq Wars along with a bad downturn.

Since that time it’s come back down to 20%, which it should slip under in 2015. But what would it take to get it back down to the average, or even that fabled golden era when our Grandparents ran the show?

Given that military spending explains 75% of the spikes, it’s worth further analysis. Barataria gave this a good look back in September when the ISIS/ISIL crisis called on us to be the Global Policeman, again. When you look at our defense spending (not counting Homeland Security, military aid, etc) with respect to the rest of the world, it’s horrifying.

Police the world? Maybe. Isn’t the real competition in the global market?

The first question when anyone proposes a decrease in defense spending is always, “Won’t that leave us weak and unable to defend our nation?” You can always say that more is good in any debate, but it would remain true that even with drastic cuts like this our close allies (Europe, Japan) would combine with us for a solid two thirds of all Defense spending around the globe, down from three quarters. We’d still spend twice as much as second-place China.

Now, there are always those who want to spend even more on defense. The latest Republican budget calls for a small increase in defense spending from today’s reduced level. But it’s worth noting that Obama produced a budget for 2016 that would have a deficit of only $380B. A reduction of just under $200B would leave that at a paltry $180B or less than 1% of our total GDP – and well within shouting distance of the last time we balanced our budget, in the Clinton years.

We can expect a lot of shouting first, however, so shouting distance is rather vast.

It’s also worth noting that in 2012 the total take of state and local governments excluding what the Feds provided was 13.1% of GDP, 8.8% of that in taxes and 4.2% in fees (such as tuition, hospital bills, etc). The total size of government in the US is about 33% for those of you who keep track of this, but between all levels only 25% is in taxes.

Want a smaller government? We do have a lot to learn from the 1950s and 60s. The answer is a simple one – peace. Armies, ships, and planes are expensive and have always been the single largest reason our Federal budget has grown. Reducing it back to a level simply consistent with the rest of the world would give us a budget that even Eisenhower would recognize.

That may not be what “conservatives” really want, but if the call is for smaller government it is the only answer. Peace is the path to prosperity, which is to say that calling on the bravest young people to solve all our problems with their blood and sweat is a very, very expensive way to go about it. This is true while saying nothing about the morality of our military machine, leaving it up to an entirely pragmatic analysis of historical facts.

Progressives, are you ready to make the call for smaller government?

If you like this blog, please vote Barataria “Best Weblog About Politics” in the 2015 Bloggies.  It only takes a few minutes.  Thank you!