The editor of an online publication revealed more than a little frustration.  “Whenever we ask for a piece on the economy,” he told me over lunch, “We either get a story on how nothing is happening or on gas prices.”  This was in the summer of 2010, which we now know was close to the bottom of the economy and the point where everything was just starting to turn around.

There wasn’t anything happening then, except for gasoline prices.  They went up and down in a kind of rhythm that defied just about everything, as they do today.

The normal fluctuations of something as basic as gasoline can become a partisan issue, at least to the extent that one party has something to capitalize on.  This election year, however, the constant up and down of the price of gasoline won’t make it because people don’t know who to blame, they are less dependent on gasoline, and it has the potential for serious blow-back on the Republicans. 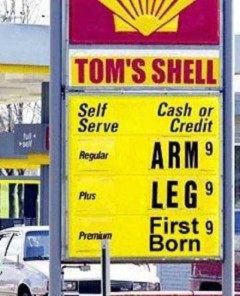 Anyone paying attention knows that there are many things that go into the price of gasoline.  According to a recent Washington Post poll, people are indeed paying attention.  The public is confused at best, casting blame pretty far and wide.  The largest single group are those who “don’t know” why the price of gasoline is currently rising.  People understand that unrest in Syria and Iran are issues, too.  Taken as a whole, the voting public comes down the middle on this issue and understands it is complicated.

That’s not to say that the Republicans aren’t trying, however.  Gingrich has told the world that if he were President he’d have the price down to $2.50 a gallon, a claim so ludicrous it was immediately laughed down.  There are still cries of “Drill here, drill now!” which suggest that if we only produced a lot more oil in the US we would have lower prices.

This is, of course, ridiculous because the oil we have remaining tends to be in places that are more expensive to tap – why they were not tapped earlier.  As soon as the international price of oil goes down any holes sunk deep in the Gulf of Mexico, for example, will be left dry.  The free market is wonderful that way – oil will never just suddenly run out, but will gradually become more expensive.

People are reacting to that market, too.  February saw the best sales of new cars since this phase of the Depression started in 2008, and the vast majority of these cars are classed as “fuel efficient” (30 miles per gallon highway or better).  Such cars now make up 40% of those sold by GM, up from just 16% just three years ago.  The economy is not as dependent on the price of gasoline as it has been largely because individual consumers are taking action.

Even though the public understands the free market and gasoline, there is more trouble for gasoline prices as an issue.  President Obama has fired back with about as much subtlety as the Republicans, calling on an end to special tax breaks for oil companies.  The implication is that in the “blame game,” which often substitutes for actual debate, oil companies are the ultimate villains.  That may be true, but it will take a bit more effort to make it stick.

As discussed before, the decline in demand for gasoline has left US refineries with excess capacity – which is being filled by exporting refined gasoline for the first time in decades.  That only makes sense, but it opens up an examination of the refining industry and how they make money.  This leads naturally to the Koch Brothers, whose Koch Industries is the largest refiner of gasoline, entirely private and shielded from the public eye, and a gleeful backer of all things Republican.  Their “Americans for Prosperity” think-tank is the center of the Republican spin machine these days, which explains the “Drill, baby, drill!” rhetoric in the first place.

Democrats have long wanted to flush out the Koch Brothers, but they have proven difficult to pin down.  They make excellent villains, however, if they come out into the open.  Making gasoline prices a big issue is probably the best open invitation to publicly vilify the Koch Brothers and make them the symbol of not just gasoline prices but everything that is wrong in US politics now.  The potential for blow-back is amazing, if this issue is handled well.

Back in 2010 it was easy to write a piece on gasoline prices, in part because nothing else was happening.  That’s not true today as a cautious recovery may be taking shape as the economy has restructured and leads with job creation.  There are simply better stories than gasoline prices, in part because the free market has worked pretty well and fuel economy is increasing, decreasing the importance of the price of fuel.  What remains are some shadows that if the right was smart would stay in the dark as long as they can keep them there.

26 thoughts on “Gasoline, an Explosive Issue”