This summer re-run is a sad one.  Since this piece ran two years ago Munchie moved out with his Mom and, just recently, passed on over the Rainbow Bridge from kidney failure.  Like any loved pet, Munch will be missed for both his cuddliness and his mischief equally.  Consider this a tribute to him and all our fur children no longer with us.

Munchie wasn’t a bad cat, but he had a reputation. His name probably came from his habit of jumping up on counters and tables, eating anything that was left out. Bread, crackers, you name it – all for Munchie. When his second or third family were moving, Munchie was handed off yet again. He found himself in his fourth home in about as many years, suddenly  living with cats who didn’t know him at all. They weren’t exactly thrilled. Neither was Munchie, who had a tendency to be crazy all night long, running and yowling. 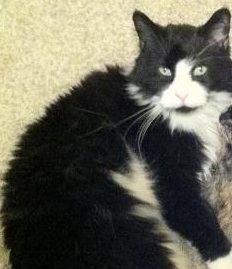 What do you do with a big cat who has an attitude? When Munchie moved in, it was time to find out.  The short answer is: he gets along very well with two other cats and even the West highland Terrier, August. Munchie only gets into trouble once in a while now, and generally seems happy. What made the difference?

I give a lot of credit to my first cat, Tony.  He is a small calibre tiger licensed for domestic use who came from the wild. Though his past is impossible to be sure of, Tony the Tiger appears to have come from a large barn full of cats and likes having other cats around. He usually meows with purpose, having a broad range of things that he says. He had a social life and the vocabulary that comes with it.

The cutest thing that Tony says is barrrROW, which I take to be a call to the pride to assemble – something like, “Where is everybody?” What’s cute about this is that I’ve heard many other cats say ma-ROW, apparently for the same reason. Tony appears to have a regional accent peculiar to his pride, or perhaps to all of the northwoods of Wisconsin. Tony has other things to say, such as barrrUP, apparently meaning “Hello!” and meYOW to signal something is wrong. A vocabulary of eight words or so may not seem like much, but it apparently it helps keep the pride together.

The other cat  of the house did not appear to speak actual words. Like many tortoise shell cats, she says “Maa-aa!” rather than anything obviously feline.  She may have been by herself as a kitten and didn’t learn how to talk. Munchie was much more eager to learn than she was, and within a year he had mastered the barrrROW pretty convincingly. This does indeed mean something to the fur children.

It’s been four years since this strange pride of cats has been assembled, and it all works rather well. What’s most clear about this is that Munch has settled down largely on his own and become a fairly normal cat. He doesn’t jump up very often, and he doesn’t get crazy all night. He gets all the attention he needs from the other cats.

Cats are, it turns out, very social animals with a simple language of their own. They even have regional accents and a place within their pride that this language reinforces. They aren’t that different from us in these important ways.

For some reason, people assume that cats aren’t social. They let them fend for themselves, without a pride or even much of a family. It’s true that some cats like it this way, but if you go to the pound you’ll quickly hear that about half of the cats speak in what can only be called cat language, and the others are just making noise. How social can an animal be when it doesn’t even speak its native language?

If you’re wondering what my point is, I’ll make it obvious: humans aren’t that different from cats. When we forget the skills and language it takes to be social, we stop being social. These can be learned later, even by individuals with a bad rap, but it’s much harder. Take a human or a cat out of their social environment, and they both act up out of a need for attention. There’s nothing quite like the love of a family or a pride or something like either to counter that bad behavior, however.

Munchie is a good cat, if a little strange at times. He’s still learning. But you can tell that he’s happy when he says his cooing barrrrUP to at Tony, and Tony says it back. That’s about what we can expect from a cat.