How will we know when the economy is turning the corner towards real growth? Everyone has their own answer, but Fed Chair Janet Yellen told us last March what she has on  her “dashboard”. As the most powerful person in the financial world, and probably the whole world, her opinion counts more than most. With the arrival of another piece of data on where we stand right now in the second quarter of 2014 (2Q14), it’s time to check in on how we’re all doin’.

What we see is that we’re making some substantial progress, but we still have an awfully long way to go before we can say we’re close to the last time everyone felt remotely flush, which is before the arrival of what Barataria calls a “Managed Depression”  at the end of year 2000.

Let’s start by running down the components individually, because a quick look at the charts shows the obvious way to quantify the gauges on the dashboard into one handy measurement of progress.

U6 Unemployment – this is the broadest measure of unemployment which includes workers without jobs, those who might work if they could find it (perhaps in school instead) and those with part-time work who want more hours. In 2000 it was at 7.1% of the population but peaked at 17.2% in 2010. Today, it’s at 12.1% 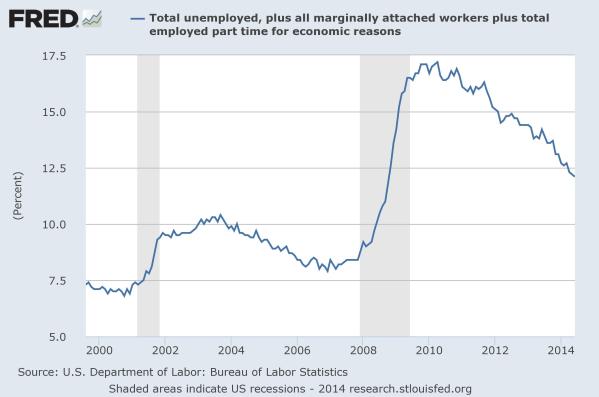 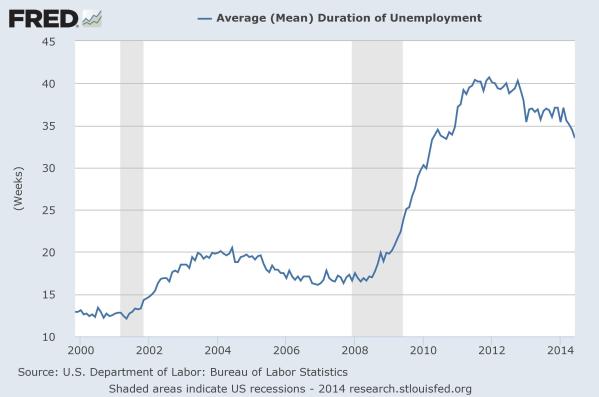 Workforce Participation – This is a tricky one, because it’s hard to tell just what is relevant. Indeed, Yellen herself qualified the problem, given that the overall Civilian Labor Force Participation Rate is falling at least in part because Baby Boomers are retiring as we’ve discussed before. So here is the participation rate among only 25-54 year olds, which is to say people who are in prime working years. It was at 84.1% in 2000 and dropped to 80.8% in 2012, where it is today. 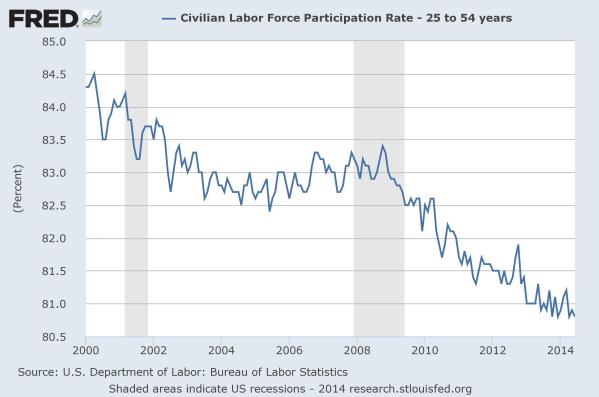 Quits Rate – This is also a bit mysterious, a data point buried in the Job Openings and Labor Turnover (JOLT) report which just came out for June. It’s the percent of workers who voluntarily quit their job, meaning they had a better offer somewhere else. It was at 2.4% every month in 2000, but fell to 1.3% in 2009. It’s back up to 1.8% today.

Taking all of this together, we can assemble a chart using year 2000 as the standard of a strong economy and look at the low point for each of these figures as the total range from goodness to badness. Where we are now is somewhere in the middle. Note that the first two are gauges that we want to be low, the last three we want to be high.

The short answer is that while we’ve made progress in the last year and even the last quarter, we aren’t even halfway back to where we were in 2000. Granted, these are items that Yellen picked because they are the most troublesome, persistent indicators that point to not just pain but lingering, chronic pain. Progress is good, but we can’t say we have a healthy economy until these hit at least 50 and growing.

When will that occur? I’m going to go out on a limb again and say that the Yellen Dashboard is not going to cross 50 until 2016 at the earliest, and won’t show substantial change until the predicted year everything changes of 2017. But progress is good all the same. Stay tuned!