“This is no time to panic. There’ll be plenty of time to panic later.”
– Author unknown (but I was sure it was Groucho Marx)

The stock market took a beating today, with the S&P 500 off 2.1%. This came for a lot of reasons but mostly because of a global selloff sparked largely by the ongoing meltdown in China. The question on everyone’s mind has to be, “How bad will it get?”

The short answer is that it can only get worse from here for a lot of reasons. Very few of them matter in the long haul, but who actually believes that the stock market is paying attention to anything beyond next quarter?

Today’s bloodletting was the worst performance since last October, when the S&P also went below the 200 day moving average (dma). That’s usually a strong “sell” signal, but it wasn’t the last time. The market roared back rather quickly and resumed a relatively strong performance.

The valley carved then settled out on the S&P500 at 1863. Even after today’s selloff it’s still at 2064, a better than 10% gain overall if you bought right when everyone else was selling.

If that wasn’t a time to panic, why would today be? The answer lies in the level of uncertainty in the markets and the long term trend towards lower corporate profits, which is to say off of an historic peak that fueled this small bull market in the middle of what has otherwise been a secular bear market since about 2000.

Today’s bears are not irrational.

A pullback is inevitable in this environment. It’s a matter of how big and how long it lasts.

Stock markets are fueled by news, and the biggest market based news remains China. There is little doubt that the world’s third largest market (after the EU and US) is cooling off. Their stock market crash is a symptom of this problem, as is the rapid devaluation of the Yuan Renminbi. When such a large market slows down it necessarily hits everyone because, believe it or not, China does buy a lot from the rest of the world. Those imports are now a lot more expensive and will certainly slump.

For that reason alone, corporate profits will be down in the next few quarters. But there’s more to it than that.

Tightening labor markets and a general push to gear up for better times have increased payrolls, too, taking a big bite out of corporate profits. This is good news over the long haul as it means the economy is generally picking up, but it has to hurt in the short run. 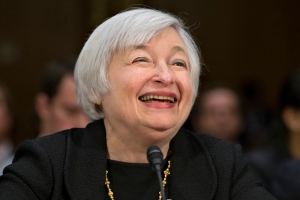 Go ahead, take us on!

Then, there is the ongoing circus of speculation that the Fed will raise rates – and they will this year. Exactly when is a big issue because the market is currently taking quite a big bet that they won’t. It’s utterly ridiculous and it certainly means that the eventual raise will come as a shock, making it more painful. Will that be in September or December? It doesn’t really matter.

That’s why the Fed should just get it over with, like ripping off a band-aid. But we’ll just see.

More to the point, it’s still summer. This time of year always sees a much weaker market overall, averaging just a 0.3% gain from May to October since 1950. This year was no exception, as the chart above shows, running more or less flat since a close of 2085 on 30 April. It’s now down 2.4% over the summer period with essentially all of that drop coming in this last wave.

There is not going to be the kind of support we saw in October in the warm months. That tendency only comes on top of some genuine fears.

Taking all of this together, there is nothing that will put upward pressure on stocks until at least October. Even then, the downward pressure is going to only intensify if the Fed hasn’t acted yet.

Is this the time to panic? No, it’s the time to slowly back away from worrying about the stock market and making sure that if it does drop the solid 11% off that 30 April level to where it was in the valley last October you’ll be allright. Such a pullback is highly reasonable and may only be the start of a very rough year.

Of course, the longer haul has to be seen as positive as most of the reasons for corporate profits dropping are due to solid investment in tomorrow and more cash for working people, two trends that only point to a much better time in a few years. Perhaps it’s best to call what’s coming a “buying opportunity” more than anything else.