“Anyone who believes exponential growth can go on forever in a finite world is either a madman or an economist.”
– Kenneth Boulding

The figure for growth in Gross Domestic Product (GDP) growth for the second quarter came in, and it wasn’t bad – 2.3%, and the revision to the first quarter was a positive if sluggish 0.6%. Like so many economic figures it’s not great but it’s also not bad. We’re still muddling through this year hoping to make it through to better times ahead.

But will there be better times? The Federal Reserve accidentally posted on its website, briefly, some internal estimates from their own economists that show that where 2015 and 2016 won’t be too bad, with growth in the 2.3-2.4% range, it may taper off after that. But can we expect better? Should we, for that matter, expect more growth from the economy?

Or is one of the big changes in this new economy a much lower growth rate than we are used to?

Overall, since 1947, economic growth has averaged 3.2% after inflation is figured out. This is something that we have become used to as one of the hallmarks of the US economy. Each generation has more than the previous one and each enjoys a better standard of living.

If economic growth does indeed slow down below 2%, as the Fed has predicted, it would mark a big change. It also runs very much against the Barataria prediction of good times after 2017.

Not everyone believes that economic growth will be that slow, however. Some private investors are calling for figures as high as 3.2% after 2017, citing some evidence of greater investment by corporations, as we have noted here as well. Before we simply accept that lower growth is indeed the “new normal”, we have to acknowledge that there is considerable argument as to what will come in the next few years.

But even if growth is less than we have come to expect, is it necessarily bad?

An economy based on software is an economy with less need for capital and more need for brains.

One of the features that we can see in this new economy is a greater reliance on software generally. The term “software” should be taken generally to mean all forms of intellectual property that are not attached to a physical piece of hardware in order to be sellable. New ways of doing things, including new management methods and ways of reducing risk, are all essentially “software”.

Productivity increases in business have certainly been rising even through economic downturns in large part because of this effect. We can also see the same effect in hard goods as new technologies become adopted – enormous TV screens came along at thousands of dollars but are now only a few hundred. Since GDP is measured by the value of output, the deflationary nature of new technologies actually lowers GDP in out years.

But does that mean our lives are worse? Not at all.

The key to the next economy is going to be figuring out how to make it work for everyone. As we have noted, if the same arrangement for the product of this great land was maintained after 1973, as it was from 1947, salaries and returns on capital would split the product 50/50. It’s down to 43% in salaries, a difference of about a trillion dollars not going to salaries. A solid half of that difference was taken from the bottom quarter of all workers if you rank them by earnings.

One of the most stubborn figures that has yet to turn around yet is the velocity of money, or the rate at which it turns over in the economy every year. It keeps crashing stubbornly lower as more money is created by the economy but not spent. It’s down to turning over a meager 1.3 times every year. 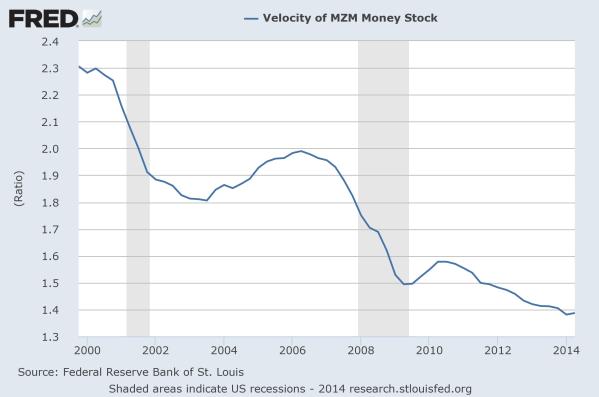 Velocity of money, as MZM, since 2000. Data from the St Louis Federal Reserve

We all know that workers living paycheck to paycheck who are paid biweekly turn their money over as much as 26 times in a year. The underground economy of cash turns over at least 3 times per year. The more money put into helping the poor eventually means more money for everyone as it turns over more efficiently.

This is the boost to GDP that no one is really counting on when the official figures are calculated.

This is the best image of happiness I can come up with.

Even so, we can reasonably expect that in a technology driven economy where a lot of the output is software there will be a lower net rate of growth overall. That doesn’t mean bad times, however, and we will have to look for new ways of measuring prosperity. David Cameron at one time proposed a “wellbeing project” to look for alternative measures, but it appears to have been quietly scrapped.

What we do know is this – expectations for lower economic growth in the next few years are causing investors to become very cautious about how they invest for the future. That does limit potential growth and it does change the way we will look at expectations.

But it doesn’t mean that good times aren’t coming – just that they will be different from the postwar cycle that fueled the economy and our opinions about it.