We’ve spent a lot of time talking about workers – where they have been beaten up for the last 40 years and how the last 15 years have if anything been worse. We outlined a way out of the problem as well by taking on the overhead per employee in an effort to make labor cheaper.

But what about capital? While this has been a good time to be rich there hasn’t been a good place to invest money, leaving much of it parked on the sidelines. Part of the prediction for a big change after 2017 is a big turnaround in investment, which has been low lately. Where will that money come from?

The bulls are – back?

There are many conflicting views of the US stock market today and they are all based on a fundamental question. Are we in a bear market or a bull market? It’s not a minor question. Investment strategies are very different based on the momentum of the market, with a bear favoring capital preservation and a bull favoring growth.

It’s hard to argue with the big gain since 2010, but it’s still not back to the 2000 high in inflation adjusted terms.

One of my favorite investors John Mauldin has an excellent piece with a summary of the bull cases and a much longer analysis of why he believes we are in a secular bear market. The term “secular” means not permanent but lasting such a long time it feels like it. The case for a secular bear since 2000 is easy to make and definitely points to continued capital preservation for the wise investor.

That’s not good for creating a boom, however. In order to turn this thing around a growth mindset springing from a real bull market is needed.

Mauldin doesn’t see that coming for some very good reasons, the largest one being the high valuation already built into the market. Today’s Shiller or multiple year Price to Earnings Ratio (PE) of 27 is quite high, and nowhere near range of 10 or so that signals the start of a bull market, at least in historic terms: 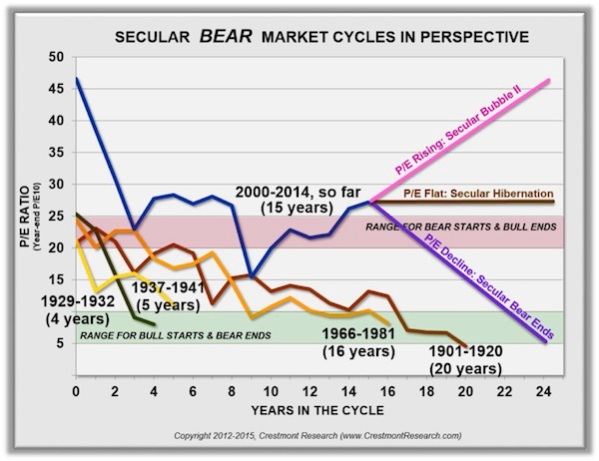 Bear markets, by PE Ratio, and where they end. From Crestmont Research.

Bank of America looks at history a little differently, and by overlaying “generational lows” in the stock market, like the one we saw in 2009, predicts a strong bull starting about 2017 (there’s that year again!) but only after a pullback of as much as 20%. This number is important because it answers Mauldin’s belief that prices are already too high at least in part.

It’s interesting how the traditional view of a bank looks like the Parthenon.

The inverse of the PE ratio, expressed as a percent, shows the expected return from the market against more passive investments in bonds or other things tied to interest rates. Today’s PE of 27 is 3.7%, the low end of a corporate bond rate. A 20% pullback would give us a PE around 22 or a rate of 4.5%, a number that makes a lot of sense. So we have that going for us.

Historically low interest rates, if they stay well below 5%, justify a higher PE and raise the potential for a new bull market. But what could possible tip it over into a wave of investment?

Let’s check in with China, the place where an awful lot of US money has gone over the last few decades.

The collapse of the Shanghai stock market was stopped for a moment, but don’t be fooled. Most of the companies on the exchange are still suspended, and everyone who owns over 5% of a company is not allowed to sell for 30 days. The government, still authoritarian, has basically told traders “Sell and you die”. That’s one way to stop a panic, eh?

It can’t hold this way forever. Chinese investors need a way out, and they may yet get one. It involves their currency, the Yuan aka Renminbi (“people’s currency”) aka RMB. It’s about to become a genuine world currency recognized by the IMF, perhaps as early as this October. That means that it will be tradable on world markets and fully convertible with everything in the world. Chinese tycoons who made a lot of the stuff can now turn it into something else.

Yes, that will happen. Anyone holding a lot of RMB, still under the watchful eyes of Chinese authorities, will turn it into anything they can. Much of that will be US dollars, you can be sure.

The entire play on the Shanghai exchange has been based on the idea that China has kept RMB low all these years to keep exports cheap, so relaxing restrictions should make RMB rise as money pours into China. But the opposite is far more likely, especially with this stock market fiasco. Money leaving China is more likely to be parked in the US as a safe haven using the same logic of any bear market. But once here, that could be the signal that finally pushes us into bull territory as the serious investment begins.

Yes, all that money that went to China might well come back. First as a panic and then as a catalyst for serious change.

So who is right about the market today? I can’t make the case that we are in anything but a secular bear market and that a correction is coming in the short term. But in the long term, where it’s less clear, there is potential for real gain. It depends on a solid correction, a big source of new investment, and interest rates remaining low to justify higher PE ratios than we have seen historically.

That may not seem likely since it depends on a lot of unusual circumstances. But the arguments for bull and bear are given here in links and you can decide for yourself. There is definitely are turning points here in 2015 before the path ahead becomes clearer and they are worth paying attention to.