The day started with a shipment of my latest experiments from Germany. The high performance plastics (fluoropolymers) which were on the cutting edge of the technology, if everything turned out right, had to be separated from the latex solution they were made in, washed, and dried. It was a lot of labor but in the 3M lab we had to do our own workup after the fully setup lab across the Atlantic pushed through our requests.

In the middle of squeezing water out of the flaky solids with cheesecloth Steve Amos came in. “A plane hit a building in Manhattan. It’s on fire.” We talked about the news for a while even though we knew little. Steve’s dad was a pilot so I knew he had to talk for a bit.  He left after we chatted and I went back to work. When he came back in a short while later he had a more stern look.

“A second building was hit. They say we’re under attack.” 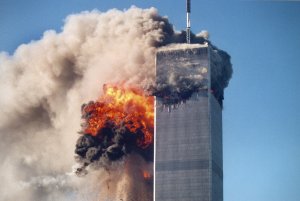 The image we cannot forget.

11 September 2001 has never had a real name attached to it. 9/11 seems to suffice for some reason, a neutral term that gives no credit or blame to anyone. It unfolded in a more gentle time when there was no internet feed, requiring us to watch the news or listen to the radio. News circulated at work in person because none of us were distracted by media constantly.

On that day Steve and I decided to go out for lunch largely because we knew a place where CNN would be on. It was the only good way to catch up on what was happening, something we wanted to do very badly. The rumors we were hearing were almost too bad to be believed, so something like the truth was needed. Teevee was the closest approximation we had.

While we were there it was announced that President GW Bush was heading to the Strategic Air Command bunker, not the White House. I turned to Steve and said, “I don’t know about you, but if World War III is about to start I’d like to be with my family.” I went to get my daughter at kindergarten and spent the rest of the day glued to the television as much as I could take it. 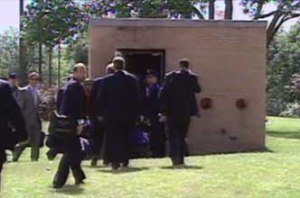 GW Bush heading into the SAC bunker on 9/11.

I never forgave Bush for that feeling deep in my guts, either.

We all knew that our world was changing. After all, a horror that we could only imagine before had just taken place in Manhattan. And in DC. And somewhere near my ancestral homeland in Pennsylvania. The skies were empty of noise, a quiet that dared us to take in the reality of a complete collapse of everything we knew.

That is what happened on that day. The week or so pause in every life was certainly the tipping point that took the economy into an official recession, one that I still believe will mark the start of a depression that is still with us today once historians are looking back on this world. We’re not out of the woods yet, and the new world we inhabit looks very different from the one we left behind.

The terrorists who were brilliantly able to turn our system on itself wanted to start a war between the West and Islam – and in many ways they have succeeded. Islamophobia suddenly became a huge part of our lives. The internet that seeped into people’s constant daily routine has been used more to fuel fear and hatred than to share knowledge and hope largely because the terrorists, to a disgusting extent, really did win.

They won so much because we demanded that they win. We couldn’t help ourselves. 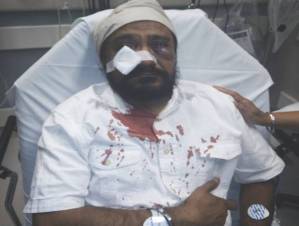 Inderjit Singh Mukker was beaten badly just yesterday in Chicago by thugs calling him “bin Laden” and a “terrorist”. He is Sikh.

The information age of great interconnection rose alongside increasing spying and monitoring largely because of our fears. The grassroots efforts that grew with the ‘net have been highly paranoid and suspicious, often based on the presumption that “the establishment” of some kind is capable of creating all kinds of havoc that needs to be reported on.

The experience has been far from empowering – it’s been largely a bitch and whine session lasting fourteen years. Our sour mood is to blame for the way we use this power and the lack of skills in organizing – Hell, the complete resistance to the need for organizing and leadership as basic concepts.

Right now, there are signs that things are changing. Supporters of Sen Bernie Sanders, though I sometimes find them very annoying, are doing a good job of using the ‘net to organize. The election of 2016 is starting out in a very grassroots way all around with more than a year to organize and gather supporters. We may finally be realizing the promise of the difficult times we’ve been through.

Looking back on 9/11 I can hardly recognize a thing. It’s almost as unbelievable now as it was then. What is even more frightening is that 10 September 2001 seems so distant it might as well be a dream. There is no way we can go back, of course, but the way ahead is only now starting to be look less horrific that it did on that terrible day.

6 thoughts on “The Day the World Changed”