Home » Nooze » Violence at the Core

Another week, another shooting. This one at a Planned Parenthood clinic, leaving three dead. The shooter, as is so often the case, was a white guy – a European-American – who in this case muttered, “No more baby parts” as he was led away. The reports that Planned Parenthood sold aborted fetuses for cash, long proven to be false, may have pushed him over the edge but that may be beside the point.

He was in a murderous state of mind. And that state is remarkably common among people of European descent.

Where we often site “Islamic Extremists” as being particularly violent, history tells us that those of us who come from European stock are much worse. It’s time we confront this problem and stop assigning the characteristic “violent” to others. 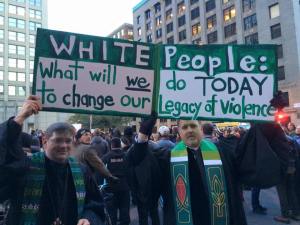 From the recent Black Lives Matter protest in Minneapolis. The two were identified as a Disciples of Christ Pastor and a Presbyterian Minister. They get this.

We see it coming up all the time. Here in Minnesota, the killing of Jamar Clark by a European-American police officer has produced a continuous protest outside the Fourth Precinct in Minneapolis. It’s always been rather peaceful, at least until a group of White Supremacists showed up and started firing into the crowd.

How does this happen?

The history of Europeans has shown that nearly every “advancement” made came at a terribly violent price. In the 20th Century alone, 15 million Europeans were killed in WWI and another 45M in WWII – a terrible record unmatched by any culture anywhere. These brutal deaths came after centuries of nearly continuous war over petty politics, religion, and just about any other reason anyone can possibly imagine.

Nearly all of the weapons sold on the international arms market and circulating among violent groups are made in nations dominated by Europeans, too.

Mass killing for political aims was not invented by Europeans, but they sure perfected it – and relied on it.

This tendency towards violence as a way to advance a cause or to solve problems was very much a part of European culture long before the conquest of North America and the creation of the United States. This is the heritage of European-Americans which we perpetuate.

Exact figures depend on when you want to start the clock and what you want to count, but there is little doubt that the vast majority of “terror attacks” in the US, more than 90%, have come at the hands of non-Moslems. An awful lot were performed by “Los Macheteros”, the Puerto Rican separatist group – possibly because we already regard the island as another nation. Aside from them, however, terror comes from European Americans far more than anyone else.

We can’t place any exclusivity on the political left or right, either. The defining characteristic of terror in the US is that it’s done by European-Americans.

No one is proposing that we create a large database of European-Americans and track them. Proposals to limit their access to weapons are routinely shouted down as a violation of the Second Amendment – and that more weapons in the hands of European-Americans, not fewer, is a logical response to the problems we see.

None of this makes any sense on the face of it. The root problem is a very simple and straightforward one – Europeans in general come from a culture of violence. It is an integral part of history and current belief systems.

If non-Europeans have learned to use violence to advance their aims it may be that they came to the conclusion that this is all that Europeans understand.

Nelson Mandela made a lot more progress as a fighter for peace and order.

That’s not to say that terrorism, an act of violence designed to inflict terror on a population, actually works. By itself it’s an empty tactic that has never been shown to be effective at anything. No group has ever won independence or achieved any goal through terrorism alone – and there is considerable reason to believe that acts of terror hampered their cause. The African National Congress made much more progress after it took up non-violent protest, as have Irish nationalist groups. Civil rights in the US came when Martin Luther King demonstrated that peace and unity was the only way forward.

Yet acts of terror persist. They do so because they feel good and the rush of adrenaline gives supporters something to cheer. It’s a disease that starts with the idea that violence actually solves problems – a concept deeply embedded in the psyche of nearly everyone of European origin.

The world is a much more violent place because it is dominated by Europeans no matter how we look at it. We won’t see an end to violence until we confront this sickness at the heart of the prevailing culture.

19 thoughts on “Violence at the Core”