It’s becoming a common theme – the economy is in great shape! Whether you want to give credit to Trump or Obama, it’s definitely all about policy of some kind, right?

Barataria has been revisiting some old arguments to build a new study for how the economy is changing. As the Managed Depression of 2000-2017 moves behind us, the reshaping of how we work, shop, and generally get by is starting to take shape. It’s hard to be sure about much.

One thing we do know – none of this happened overnight. So let’s revisit some old discussion.

Optimism starts out small. There’s room to grow it.

About four years ago, in April 2014, Barataria outlined the “Case for Optimism” about the economy. It was met with considerable resistance as workers were not yet feeling the improvements in their paychecks. Hell, some didn’t even have a paycheck yet. But it was obvious in 2014 that things had indeed turned around significantly. Quoting myself:

Either I’m ahead of the curve or I’m just plain wrong – you get to pick. All I ask is that whichever you pick now you file away, with this piece, and evaluate the decision for keeps later. But this is the case for the economy finally picking up this year and developing strong momentum into 2015 and beyond – into 2017 when I still think good times will be had.

Were things really as good as I said in 2014? The short answer is yes, it all worked out pretty much as I outlined. Corporate profits did, eventually, lead to an increase in hiring and an uptick in wages. Wall Street continued and even accelerated its tear. Research has started bearing fruit. Gasoline has stayed cheap for years.

The main difference between 2018 and 2014 is that four years ago it was in the best interests of some politically minded people to relentlessly trash-talk the economy. Now, it is not. What has changed is largely the spin.

However, that’s more important than it sounds.

It’s not as though things are rosy yet. We still don’t have a strong manufacturing base. Retail is going through gut-wrenching changes powered by the internet. The next two years are likely to be the most important, as we learn how stable things become.

This is, as always, the real issue. It takes years, if not decades, for the economy to right itself. Employment gains take years longer. Confidence comes in a few years of a reliable paycheck. Nothing happens overnight.

The net change is indeed all about attitude, but that is always critical. If people have faith in Trump for whatever reason he will indeed help things move along. Then again, if he starts a pointless trade war he will do untold damage. 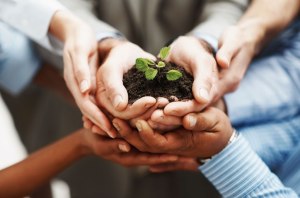 Where are we today? On the edge. The gains of the last few years, perhaps decade, have finally started to come in. Spring is here. That is, as any farmer will tell you, when the hard work comes. What we plant today is, as always, what we will harvest tomorrow.

That doesn’t mean that a lot of BS doesn’t make for good fertilizer. It means that we are, as always, setting up the next 17 years or so of economic cycle by the actions we take now. If they are nothing but BS, we’ll have nothing but mushrooms. If we think long and hard about what we plant, and work really hard to help it grow, we could have a balanced diet that nourishes the world.

It’s never about centralized policy, it’s about the combined actions of 320 million people working in their own interests, sometimes together and sometimes alone. They will make stupid choices in the short term once in a while, but in the long haul it hopefully all works out. And their kids will grow up in a different world and make their own choices in turn.

Who gets credit? Everyone.

2 thoughts on “Credit the Good Economy”