Another month, another disappointing jobs report.  Following the same patterns as last year, employment gains over the summer are falling far short of what appeared to be momentum building in the winter.  The gain of 80k jobs in June is just enough to keep treading water, enough to absorb the net increase in the workforce as Millenials graduate in June and set out to make their own way in the world.

Given that politics, economics, and any other social arrangements we can think of are tied together we know this will have an effect on the election in November.  This should also shape the attitudes of an entire generation as they grow older and contemplate raising families, starting businesses, and generally making the world in their own image.

Summers always see a “mini-recession” in economic activity, which is part of the reason why many government figures are “seasonally adjusted”.  Young people, in particular, get summer jobs and have some income – but overall spending tends to go down as big purchases are set aside for the price of a few drinks on a beach.  What has been unusual lately is that these seasonal turn-downs have been enough to turn attitudes about the economy around and instill a sense of panic.

In an election year, there’s someone who benefits from sour thinking, so we can expect more of it.  This is the Obama job record so far in one chart from the St Louis Fed, starting in February 2009. 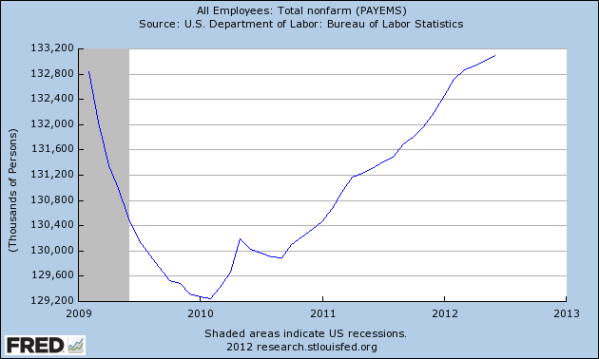 That weak smile that says, “Don’t worry, be happy” is still not very convincing.  It hasn’t actually changed all that much through these weak job reports, but it has not improved either.  Obama still has a net gain in jobs over his term, but the headline unemployment rate stands at 8.2%. Re-election is not a slam-dunk.

Yet this could be enough for Obama, given that people don’t expect much.  It’s popular among talking heads to note that no president has been re-elected when unemployment stands above blah-blah percent.  However, most people know that things are very bad and have different standards.  In 1936, when FDR was re-elected, the unemployment rate stood at 16.9%.

What’s missing in this election, however, is not just the jobs.  It’s enthusiasm.  The young people working hard under sweaty t-shirts emblazoned with “Hope” are missing this time around.

We might possibly be able to express what’s happened to the young generation in terms of employment as well.  Take a look at the unemployment rate among 20-24 year olds during Obama’s term: 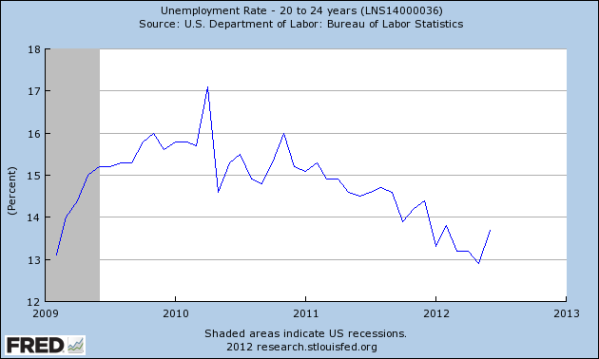 It’s always hard to make absolute sense of “unemployment rates”, given that they don’t count people not looking for work.  Kids who stay in grad school don’t count, as do those with a part-time temp gig that pays so lousy they can’t afford to live away from their parents.  But what we see is that one in seven young people are completely without work that they want, hardly an improvement from one in six.

This may tell us a lot about the lack of enthusiasm in this election, but it will also have a searing effect on a generation’s attitude as they grow older and eventually take their place in this world.  Unemployment in this age group, which runs between 7.5-10% in good times, is not only historically high but stubbornly so.

This gets us back to summer because, as we can see, there is no strong summer variation in the youth unemployment rate.  There should be.  The “seasonal adjustments” are designed to take care of the overall picture and not the variation expected in a small group of 2.1 million unemployed young people.  The normal outlets for opportunity aren’t firing up for them at all.  That may be a lot of what is missing in the economy in the short term – and you can bet that this will be seared into these kids’ minds as they grow older.

The employment picture is definitely not good.  There are ways of looking at it that are simply terrible though as we manage to stay relatively even overall.  The “enthusiasm gap” that Obama is suffering from right now is a symptom of a much bigger gap between generations that will be with us for a very long time.

22 thoughts on “Unemployed and Unenthusiastic”