Through this populist uprising standing in for an election, one issue unites all the candidates that are left. Sanders was always against free trade agreements, like the pending Trans-Pacific Partnership (TPP). Clinton is too, at least now she is. Cruz doesn’t seem to have much time for them, and after years of talking both ways Trump is now firmly against these “bad deals”.

It’s not about TPP or any new trade pacts, either – it’s about (supposed) horrors of the North American Free Trade Agreement (NAFTA) and our current deal with China.

Going over the past is a way to pin down the establishment, which is to say Clinton. But Trump, at least, once to re-negotiate the old deals and turn them back. Was free trade such a bad deal for the US? Is it worth going over old ground?

For all the noise on this issue this year it’s actually not a good issue outside of its value as a populist rallying cry.

Obama attending one of the more public moments in TPP negotiations.

The TPP is not worth talking about in this climate as it dies a slow death. Whether the Senate turns Democrat, as the betting money now says, or not it doesn’t matter. There is no appetite for a new deal on either side of the aisle. Clinton, should she become President, as the betting money also says, is unlikely to bring it up. The issue of trade deals is largely academic unless old agreements are revisited.

That is exactly what Trump, for one, has suggested should be done in the past. Sanders hasn’t explicitly said he would revisit NAFTA, but his passionate insistence that it was a bad deal does beg the issue as well.

It’s common to cite the study by the Economic Policy Institute (EPI) that NAFTA cost the US 850,000 manufacturing jobs. They calculated this through a series of methods, but mostly through the harsh reality shown below. From 2000 to 2010 the US lost over 5 million jobs in manufacturing, about 30% of the total: 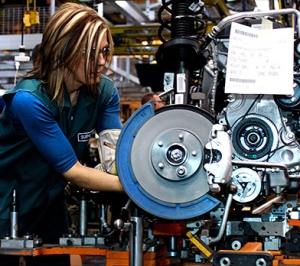 The jobs are there!

The chart above starts in 1992 for the purpose of comparing everything to the pre-NAFTA world. The treaty was sold on the premise that it would create, not destroy jobs – and there is certainly little evidence of that. Manufacturing employment was rather steady before it fell off a series of cliffs in the two official recessions that Barataria, for one, considers one long Depression.

In fact, this is given as evidence that the period from 2000-2010 at least is one economic event, as the bloodletting continued.

That’s not to say that the figure of 850k jobs lost to free trade is universally held. The Institute for International Economics (IIE) calculates that as many as 1 million jobs were created by NAFTA, and the US Chamber of Commerce puts the figure at closer to 5 million. How is that possible? The graph below shows relative manufacturing output over the same period, adjusted for inflation:

Manufacturing output, adjusted for inflation, with 2012 defined as 100. Data from the St Louis Federal Reserve.

The total value of manufacturing output in the US has nearly doubled since 1992, which is to say that we’re producing quite a bit more stuff. That probably seems counter-intuitive in an age where “Made in China” appears on nearly everything, but it’s true. Manufacturing is booming – it’s just not creating jobs.

The term for this is “productivity gains”, which is to say that American manufacturers are making a lot more with less. We’ve covered this before in greater detail. The overall increase in productivity in the economy is nowhere near as intense as the net gains in manufacturing.

More stuff is made by fewer people.

This trend, which defined the recent Depression, is unlikely to continue. There are many signs that productivity gains are slowing and there is an approaching shortage of labor as Boomers retire. That’s the reason why Barataria sees good times coming after 2017 and a much stronger economy as there is strong upward pressure on wages – something we saw in 2015 for the first time in 15 years.

That’s after the election, of course.

Was NAFTA a net job killer or a job producer? It’s nearly impossible to tell given the trends that we see. The gains in productivity certainly overwhelmed any benefit we might have had by opening up trade and there is certainly a loss of some production due to foreign competition.

Trade deals are convenient in politics because they put the blame for our woes on foreigners and politicians – two easy scapegoats. Blame is probably better put on robots and large companies, although the latter has the reasonable excuse that they have to remain competitive. Still, effects like a strong US Dollar and the overhead per employee are probably far more important than trade deals as the manufacturing workplace changes.

New deals are almost certainly done for now, and that’s not necessarily a bad thing. They are probably still good foreign policy tools but as economic development tools they are likely pretty neutral overall. Barataria will take the position that supporting Mexico is very much in the best interests of the US for many reasons, but aside from that free trade agreements are just not that important.

Lowering the cost of workers by taxing profits, not labor, is something we can do right here at home. Such reform has been rejected by the Republican voters but might yet form a good policy position for Democrats if given a populist flavor. And investment in infrastructure like high speed rail will certainly pay great dividends as shipping from US manufacturers becomes cheap enough to eliminate inventory, giving a plant or craft shop here a great advantage.

There is a lot of public policy and investment we should implement to fix manufacturing, but much of it is likely to fix itself now that massive productivity gains have been digested. Trade deals are dead for now, but that probably doesn’t matter. There isn’t any old ground worth going over, however.

None of this will stop the constant battle cries, however. Trade deals just feel bad and people are still hungry and angry over the struggle. That’s OK, even if it is probably the wrong place to focus anger on.