Are you ready for the next Ronald Reagan?  Not here, in Japan.  The new Prime Minister, Shinzo Abe, has been in office for less than a month and is already making a lot of waves with a bold new vision – spending  whatever it takes and a strong dose of saber-rattling nationalism.  It’s the latest – or really the first – plan to get Japan out of the two decade long doldrums and back onto the world stage.  Will it work? 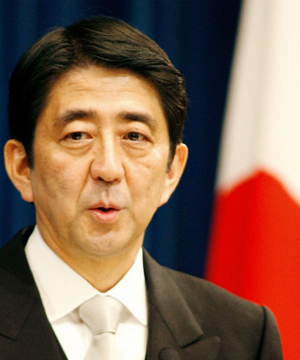 It’s important to start with where Japan was when Abe’s Liberal Democratic Party swept the election on December 26th.  Where Europe has taken the path of austerity and the US has opted for Keynesian stimulus (or profligate spending, if you must), Japan has taken a third path through this depression – doing pretty much nothing.  The results have been meandering between blah and a complete yawn, to the point where hardly anyone has reported on how terrible things have become.  The great exporter now has a widening trade deficit, a growing pension debt as the population ages, and two years of deflation.  The results for 4Q12 are not in yet, but they will almost certainly show more economic contraction and a slide into official recession.

Against the background of nearly a generation of doing nothing, the way out became clear – doing something.  Anything.  Please?

Abe has directed the Bank of Japan (BOJ) to do whatever it takes to make it work, which is going to be more “quantitative easing” primarily focused on buying government debt.  They have set an inflation target of 2%, in line with the rest of the developed world, and the government will spend on just about anything it can to hit that target.  That should end the deflation, or so they hope, and it should also get the economy moving again.  It’s where Abe wants to spend the money that raises a few eyebrows around the world, however.

Japan is located very close to some potentially nasty neighbors.  China clearly has ambitions, at least in the region, and is willing to risk war over a few unpopulated islands.  North Korea has in the past launched missiles directly over Japan, with their latest test landing terribly close to Japanese Okinawa. Abe wants to test the limits of Japan’s post-WWII Constitution by boosting its military and making itself look much more dangerous.  When the government is itching to spend money for stimulus and the threats seem pretty obvious, military spending is going to be a pretty easy sell.

Given Japan’s history, however, more than a few eyebrows have been raised over this.  When the last depression swept the globe, Japan was actually the first to implement a solid “New Deal” style of spending, in 1931.  The result was a quick recovery well ahead of its neighbors and the European powers.  The resulting expansion into WWII became almost inevitable given Japan’s great success.  Those who study history worry that Abe is playing with fire with his proposals.

Not Abe.  Fire is probably his friend, given the complete lack of it for so long in Japan.  The population is very firmly behind him, largely out of desperation after being so long on the decline both economically and diplomatically.  Japan is simply not a nation of consequence any longer, especially given the strength of nearby South Korea.

Critics are concerned about far more than Japan’s military ambition, of course.  The nation ran up a huge tab through the last two decades with government debt, now a stunning 229% of GDP (roughly twice the US).  More stimulus means more debt, even if the BOJ is willing to absorb it all.  What’s the worst that can happen?   The Yen becomes about as valuable as toilet paper, and Japanese exports once again become very cheap – as they were in the period of high growth, roughly 1960-1980.  To Abe, there’s no way to lose this game.

The rest of the world, of course, is not so flippant.  While everyone wants Japan to succeed the prospect of a serious currency war flaring up in Asia has everyone rightly concerned.  The pressure on South Korea will become huge, especially given their growing wealth and purchasing power.  China has always been reluctant to release the Yuan to international trading, and this will only make them more hesitant.  The tremendous gains of the middle class in Asia generally are all at stake in this potential conflict, and there are no stakes higher as populations stabilize and growth becomes trickier.

How will this all go down?  No one is sure yet.  What we do know is that for the first time in decades the economy and politics of Japan are very interesting – and worth reporting on.  As the old curse goes, “May you live in interesting times”.